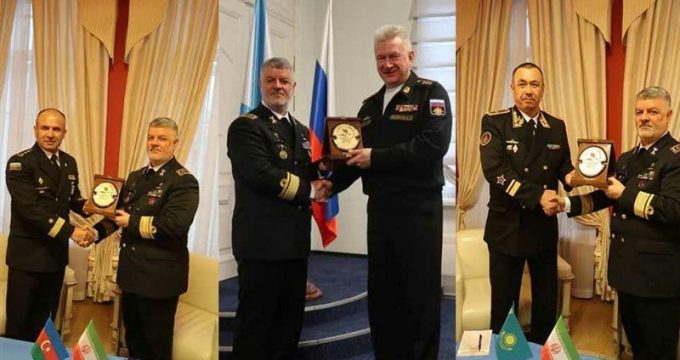 Tasnim – The is no need for the presence of foreign forces to ensure security in the Persian Gulf, Iran’s Navy Commander Rear Admiral Hossein Khanzadi said, denouncing the US-led maritime coalition as a dirty plot.

The Iranian Navy commander held separate meetings with his Russian, Azeri and Kazakh counterparts on the sidelines of the 4th meeting of the Caspian Sea littoral states’ navy commanders in Moscow.

In his meeting with Commander of Russia’s Navy Nikolai Yevmenov on Thursday, the Iranian admiral underlined that the Persian Gulf is safe and there is no need for the extra-regional countries to protect its security.

Decrying the US-led maritime coalition, Khanzadi said, “The extra-regional countries created a coalition on the pretext of providing security for trade vessels in the Strait of Hormuz and the Persian Gulf, but they must know that their dirty plots will end in failure.”

For his part, the Russian commander confirmed that only the extra-regional countries are behind insecurity in the Persian Gulf.

Yevmenov further noted that a Russian flotilla is going to attend a joint naval drill with Iran in the Indian Ocean in the near future.

The two commanders also weighed plans for closer interaction in combatting common threats, a trilateral naval exercise with China in the Indian Ocean, and a joint maritime rescue and relief exercise in the Caspian Sea.

In April, the Iranian Navy commander unveiled plans for a joint war game with Russia in northern parts of the Indian Ocean and the Sea of Oman.

The Iranian Navy has held several exercises with the neighboring countries in recent years.