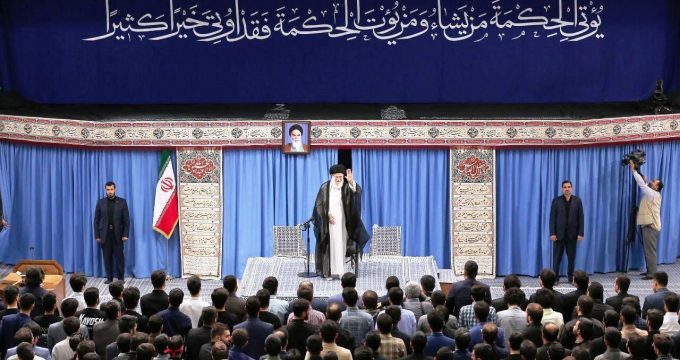 Although we could, we never approached nukes because they’re haram

Khamenei.ir – A group of academic elites and top scientific talents met with the Supreme Leader of the Islamic Revolution—Ayatollah Khamenei— at the Hussayniyeh of Imam Khomeini this morning October 9, 2019.

The following are the excerpts of the statements his eminence made at this meeting:

“Nuclear science is beneficial but since it’s not been coupled with love for humanity, it led to nuclear disasters. Despite having the ability to develop nukes, we firmly and bravely avoided it, for building and keeping nukes, like using them, is haram.”

“Science, if not coupled with the upright intellectual approach, will become dangerous. That’s why we believe academic elites should seriously pursue ‘religion’ and ‘nationality’. We want science but we don’t want our universities to be a reproduction of some U.S. university.”

“Iran’s intellectuals can play an important role in public diplomacy. Connecting with West Asia, World of Islam, even the world’s truth-seeking academics including those in Europe or America can lead to the promotion of pure and humane knowledge.”

“The Islamic revolution has offered the world a 3rd option which is neither socialist nor liberal democracy. We should be able to attract hearts by our logical words and actions to this path beneficial to mankind and save nations from the infiltration of West’s deviating culture.”