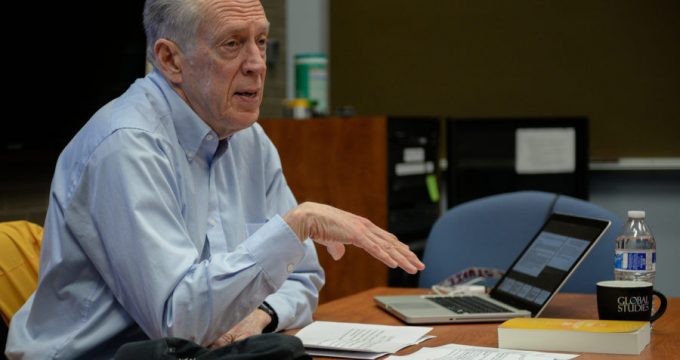 US ex-diplomat says Iran knows Trump is not trustworthy

IRNA – The former US ambassador to Peru told IRNA that the US President Donald Trump is “unpredictable” and Iran knows well that he is not trustworthy.

Iranian President Hassan Rouhani decided that any contact with the US President Donald Trump, ‘even a telephone conversation’, had ‘no advantage’ and ‘wouldn’t produce any result,” Denis Jat said.

“I don’t blame Iranian side for that. It is understandable. I think … Trump is unpredictable and untrustworthy.”

He also said that Trump is sitting there tweeting out pronouncements “without any adult supervision.”

Regarding the fact that Iranian and the US presidents had no contact, the former adviser to the US Department of State said that Iran has already said that results first, photo ups and phone calls second.

He added that Trump plans to use the chance in his presidential campaign as a victory in foreign policy, but, the problem is that he is not predictable and trustworthy.

The professor at University of Pennsylvania said that Trump is “desperate” and has been looking for a diplomatic victory to deviate the public opinion from his impeachment and domestic issues.

Answering question about Trump’s reason not to lift sanctions so as to be able to start dialog with Iran, Jat said, “He thinks he is a great negotiator. He doesn’t want to give anything away before he gets something.”

“He wants the symbolic victory of a meeting first before he lifts any sanctions.”

Regarding the possible consequences of the impeachment process on Trump’s foreign policy, he said, it is hard to predict.”

What is clear is that Trump is trying to turn foreign policy into an instrument for his reelection, and that’s why he is going after Ukraine and China, he said.

When Trump is under pressure, he denies everything and then he blames the opposition to whatever he himself is accused of. He distracts and delays, Jat added.

He added that Trump may even talk about the country’s low unemployment rate which is the lowest in 50 years. He may say that the economy is great so everyone should ignore the fact that he is appealing to foreign nations to intervene the election.

He said the economy is not going to stay like that: the stock market has been down and Trump has ventured into trade war with China.

“The danger is that he looks for distraction by creating a military confrontation with Iran… The good news is that Mr. Bolton is not around any longer. But [still] trump is unpredictable and untrustworthy.”

The fact that there are no diplomatic contacts between Iran and the US is a danger, misinterpretations become easy, he said.

Touching on the possible impeachment of Trump, Jat said, “He will be impeached in the House.”

There, only 20 Republican senators are needed “to show enough integrity and independence” to put their country before their political party to do the right thing.

Answering a question about what would happen if the whole process failed, he said that “Trump regime” will not get stronger, because the voter are becoming aware of its “corruption and incompetence”.

“Americans don’t want foreign interference in the elections… [But] that’s what Trump has been seeking.”