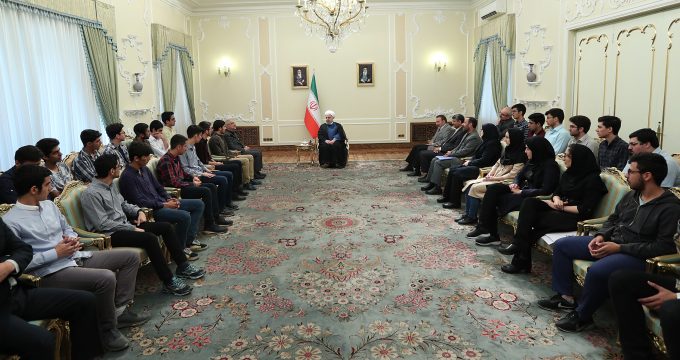 President.ir – President described the role of students’ families and the family environment effective on the progress and flourishment of students’ talents, saying, “Elites and those who have won medals at international contests are heroes in the fields of talent, education and learning”.

Speaking on Sunday in a meeting with students who have won medals at international contests in 2019, President Hassan Rouhani said, “Part of being an elite is related to intelligence and memory, but a big part of it is individual effort and attempt”.

He added, “Based on religious and Islamic criteria, parents’ psychological state is very effective in how children are raised and their talents are flourished”.

Stating that talent may show itself at any stage of a person’s life, the President said, “We need to work hard in maintaining talents in our elites and have plans for them”.

“We have to take care of our exceptionally talented students until the end of their education,” added Rouhani.

He continued, “Fair competition based on the right basics will be effective in development and progress”.

Dr Rouhani added, “Fortunately today, the Administrative and Recruitment Affairs Organisation has done a great deal in the employment and recruitment system to employ elites”.

The government is taking advantage of the elites in different fields, said the President, adding, “One of the government’s efforts in this regard has been supporting knowledge-based enterprises”.

“The elite must be employed in ministries and public organs,” he said, adding that the government has put a great emphasis on this.

The President said, “Today, skills, science, knowledge and technologies are constantly changing and learning materials need to catch up”.

He also went on to state, “Studying and learning skills must be pursued with the latest global trends”.