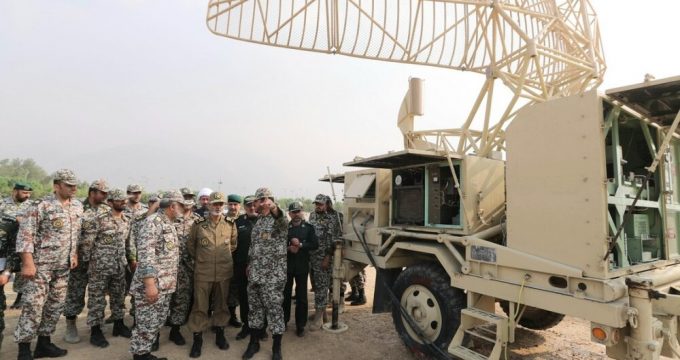 The center is equipped with the latest homegrown control and surveillance technologies with the capacity to help keep a better watch on the region.

The Southern-based air defense forces of the Iranian Army and the Islamic Revolutionary Guards Corps will be under the direct command of the Persian Gulf Air Defense Headquarters.

On Saturday, Head of Iran’s Army Center for Strategic Studies Brigadier General Ahmad Reza Pourdastan said that his country is enjoying superior systems which enable Tehran to keep all military movements in a broad range outside of the region under tight surveillance.

“All the enemies’ moves at the borders and inside and outside the region on the ground, in the air an at sea are being carefully monitored through different systems,” Brigadier General Pourdastan said on Saturday.

“Warnings sent by [Iran’s] Armed Forces have undermined the willpower of the Americans and led to deterrence,” he added.

He noted that the downing of an intruding US drone in June gave a “very strong warning” to the Americans because they sought to wage a “limited war in the region” but their unmanned aerial vehicle was shot down by a domestically-manufactured Iranian missile.

On June 20, Iran shot down an intruding American spy drone in the Southern coastal province of Hormuzgan.

The Iranian commander further praised high security along the country’s borders and said there is “no specific military threat.”

“If there is any threat, it can be in a limited form and there is also the capability and capacity to nip that threat in the bud even before it reaches the borders,” Pourdastan pointed out.

Also on Saturday, Iranian Deputy Defense Minister Brigadier General Qassem Taqizadeh said the US has stopped flights of its U-2 reconnaissance planes over the region for the fear of being intercepted by Iran’s powerful air defense system.

“The US moves in the region are monitored every hour and for instance, the flights of the US U-2 planes which took off from Cyprus and flew twice over the region stopped after Iran made and operated Bavar 373 air defense system and after they found out that the system can trace and destroy them (the U-2 planes),” General Taqizadeh said, addressing a ceremony in Tehran.

He added that Bavar 373 can intercept and destroy the most advanced US planes at the altitude of 27km and the range of 200km.

“Most US interests are within a distance of 220km from Iran and if they hit a blow to us, their interests will be attacked,” General Taqizadeh said.

The country in August unveiled the home-made version of the sophisticated Russian S-300 missile defense system, dubbed as Bavar (Belief) 373 with the capability to target ballistic missiles.

“Bavar 373 is the most important indigenized missile defense system whose design and manufacturing started a few years ago and can engage multiple targets in high altitudes,” General Hatami said, addressing the ceremony.

He added that the Iranian defense industry experts have gone through the reverse engineering phase and designed and manufactured the parts relying on domestic capacities.

The system is much more powerful than the Russian S-300 and some of its features could be compared with S-400.

“Bavar 373 is a tough rival for this class of systems and stands even far above them; it has been a very wide leap in defensive deterrence power against enemy threats,” General Khoshqalb said.

“It is a system which can act against all types of threats,” he added.