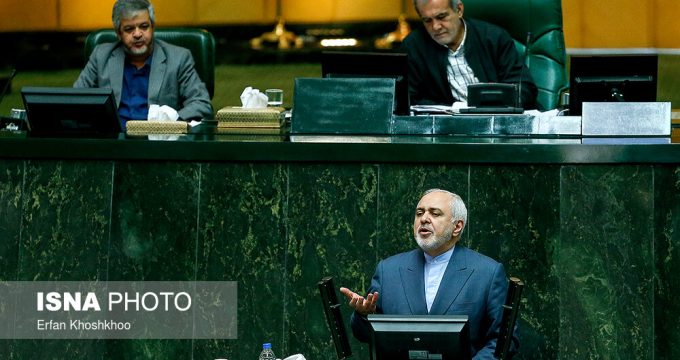 IRNA – Foreign Minister Mohammad Javad Zarif said on Sunday that Iran’s foreign policy has focused on having good neighborly relations with the regional states and special economic cooperation in the region.

Zarif made the remarks answering to a lawmaker’s question about why Iran has not had sustainable diplomatic cooperation with its eastern and southeastern neighbors including Pakistan.

Elaborating on Iran-Pakistan ties, the foreign minister said there is no confusion in Tehran’s relations with Islamabad.

Despite existence of some problems in bilateral relations which is due to the regional situation and the interference of foreigners, Iran enjoys good cooperation with Pakistan, Zarif stressed.

Talking of regional questions including peace in Afghanistan, Zarif said that Iran’s stance on Afghanistan focuses on peace with participation of all parties in Afghanistan.

Iran does not pursue the Afghanistan peace process which has gone through by the foreign presence, he stated.

Ties with Afghanistan are being followed up by Iran under a definite policy as well, the foreign minister noted.

He further stressed the importance of considering the guidelines made by the religious Ulema and representatives about sustainable security.

On construction of dams by Turkey, Iran’s western neighbor on the Euphrates and Tigris rivers, Zarif said the officials of the Iranian Foreign Ministry have had different meetings with their Iraqi, Syrian and Turkish counterparts on the issue, but it has made slow progress as Turkey has not joined international convention on water.

Elsewhere in his remarks, Zarif answered to a question about Turkey’s military presence in Kurdish areas of Syria, saying Iran has declared that settlement of the Turkish military forces in its national border lines is the only way to ensure the Turkish security.

Iran has already expressed its readiness to cooperate with the Turkish and Syrian Governments to solve the problem based on the International Law, Zarif said.

Iran will not allow any country in the region to give its soil to terrorists to let them serve their interests.