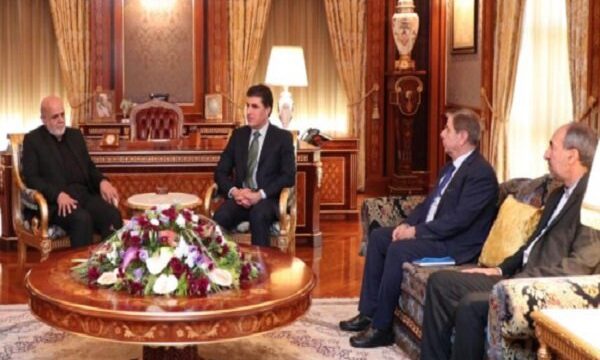 Iran’s ambassador to Iraq meets with KRG president in Erbil

According to Abdullah Akrei, the Kurdish official at KRG Foreign Relations Department in charge of relations with Iran, Masjedi and Nechirwan Barzani discusses Iran-KRG bilateral relations and ways to expand them, as well as the developments in Iraq and the region.

On his visit to Erbil, which started on Wednesday, the Iranian envoy to Baghdad also held a meeting with the secretary of the Kurdistan Democratic Party (KDP) Executive Committee Fazil Mirani to exchange views on bilateral relations.

His first meeting in Erbil was with the Prime Minister Masrour Barzani to confer on Iran-KRG relations as well as the developments in Iraq and the region.

While in Erbil, the diplomat also held a meeting with Qubad Talabani, from the Patriotic Union of Kurdistan (PUK), who serves as the KRG deputy prime minister.