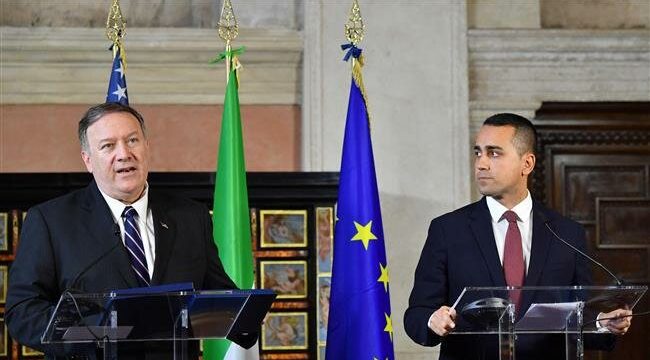 Press TV – US Secretary of State Mike Pompeo has sought to convince Italian officials that they should comply with Washington’s sanctions on Iran and ban the Mahan Air carrier from accessing Italy’s airspace.

Pompeo said in a meeting with Italy’s Foreign Minister Luigi Di Maio on Thursday that he was glad that Italians were considering the ban on Iran’s second biggest airline.

A transcription of Pompeo’s remarks during the meeting, provided on the website of the US Department of State, indicated that Pompeo was actually welcoming Italy’s decision not to renew Mahan Air’s flight licenses.

However, there has been no official confirmation suggesting Rome has enacted such a ban. Thursday reports showed that Di Maio had responded to Pompeo’s remarks on Mahan Air by saying that related authorities in Rome would make an announcement on the issue in the coming days.

Washington has included Mahan Air in its list of sanctions on Iran alleging that the major carrier has been assisting the IRGC, Iran’s elite military force which has been blacklisted by the US.

Italy has received rounds of waivers from the US on Iran sanctions. It is not clear how the country will decide on Mahan Air, one of two airlines that operate flights between Iran and Italy, as such a ban could have impact relations between Tehran and Rome.

Pompeo used the Thursday meeting with his young Italian counterpart to highlight his government’s pressure campaign against countries like Iran, China and Venezuela, saying the three were the most problematic for the US.

He told Di Maio that Italy should be cautious about dealing with China as a country that “uses its economic power to cultivate political influence and erode sovereignty.”

He urged Rome to unite with the US in the “necessary task” of confronting the Venezuelan President Nicolas Maduro.

He also welcomed Italy’s continued alignment with European Union efforts to pressure Russia over a years-long crisis in Ukraine, saying sanctions on Moscow should remain until the situation in Ukraine is back to normal.