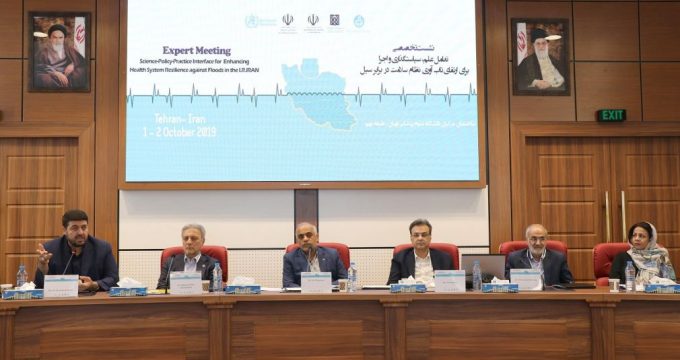 WHO assists Iran to enhance health system resilience against floods

United Nations Iran – World Health Organization (WHO) in collaboration with the Ministry of Health and Medical Education (MoHME) of the Islamic Republic of Iran hold a two-day (1-2 October 2019) expert meeting in Tehran on Science-Policy-Practice Interface for Enhancing Health System Resilience against Floods in the country. The meeting has been organized in support of the Special Commission for National Report on Floods appointed by President Dr Hassan Rouhani.

The event brought together a diverse array of international experts and national stakeholders from science, policy and practice to better understand how to work both individually and collaboratively in improving health system resilience to floods. The results of this expert meeting will be incorporated into the report of the “Special Commission”.

In the aftermath of the floods, the President of the Islamic Republic of Iran appointed a “Special Commission for National Report on Floods” consisting of independent experts and scholars. According to the President’s letter of appointment, “people have the right to receive scientific, credible and precise answers about the different aspects of these floods, the degree of the country’s readiness to deal with floods, and the practices concerning disaster management, damage estimation, damage compensation, and the necessary reforms for increasing national readiness for dealing with floods.” The Special Commission’s report is expected to serve as a key reference in resilience-building against floods in different sectors of the country, including the health sector.

Dr Ahmed Al-Mandhari, the WHO Regional Director for the Eastern Mediterranean in a message to the meeting underscored that while the science of flood risk management continues to advance, countries often struggle to make policy on the basis of the existing science, and the challenges are even greater when it comes to putting policy into practice.
“The interface between science, policy and practice represents the space in which technical experts, policy-makers and practitioners can pool their diverse areas of expertise to develop a holistic understanding of an issue in order to create effective policy and plans” he added in the message that was read by Dr. Ali Ardalan, Regional Advisor and Manager of Health Systems in Emergencies Lab (HSEL) at the WHO Regional Office for the Eastern Mediterranean (EMRO).

Laleh Najafizadeh, the Health Emergency Progarmme Coordinator at the WHO Country Office Iran also in her presentation by highlighting the fact that building resilient health systems requires a holistic approach to health system development, said: the engagement of government at all levels, as well as civil society organizations, the private sector and local communities is crucial.
“WHO provides facilitates cooperation between health authorities and other relevant stakeholders to strengthen health system capacity and resilience for disaster risk management,” she added.
The initiative of the Islamic Republic of Iran to establish this Special Commission is a model for prioritizing science-policy dialogues at the highest level of a government. It also reveals the country’s commitment to the systematic use of science in policy-making for disaster risk reduction.

An example of this commitment is the development of a post-graduate programs on health disaster management at PhD level and establishment of corresponding academic departments by the Ministry of Health and Medical Education (MoHME) in the affiliated universities.
The Islamic Republic of Iran, like many countries, faces emergencies and disasters that have severe public health impacts. By the end of 2018, natural disasters in Iran caused over 73,000 deaths, affecting 42 million people and caused 20 billion USD of economic damage. While the country has invested considerably in disaster risk reduction, the recent floods in March and April 2019 proved that the country is still extremely vulnerable to such hazardous events.

The floods and subsequent landslides have affected 43 out of 83 million people in 25 out of 31 provinces, leaving 2 million in need of humanitarian assistance. The floods have killed 86, injured 2,193, and displaced roughly 365,000 individuals. The destruction of infrastructure, both private and public property, was extensive and widespread – an estimated 65,000 houses were destroyed and over 114,000 were damaged. The floods also destroyed, either partially or completely, 927 health facilities, disrupting health service delivery at a time when it is needed most. The Government of the Islamic Republic of Iran estimates the total economic loss to be at 4.7 billion USD. Despite the extensive damage, the early warning systems throughout the country helped save the lives of thousands of citizens during the emergency.

Although focusing on the March-April 2019 floods in Iran, this initiative will serve as a pilot for similar expert discussions on different types of emergencies in the Eastern Mediterranean Region – and beyond. It is also aligned with the Sendai Framework for Disaster Risk Reduction (SFDRR) that emphasizes: the enhancement of scientific and technical work on disaster risk reduction, the promotion and support of the availability and application of science and technology to decision-making, the support of the interface between policy and science for decision-making, and the support of action by local communities and authorities.