Trading companies such as Bunge (BG.N) and China’s COFCO International have been hit by payment delays and additional costs of up to $15,000 a day as the renewed U.S. restrictions stifle the processing of transactions, trade sources said.

Food, medicine and other humanitarian supplies are exempt from sanctions Washington re-imposed after U.S. President Donald Trump said he was walking away from a 2015 international deal over Iran’s nuclear program.

But the U.S. measures targeting everything from oil sales to shipping and financial activities have deterred several foreign banks from doing any Iranian business, including humanitarian deals such as food shipments.

Six Western and Iranian sources said the situation was contributing to the cargoes being held up for more than a month outside Iran’s biggest ports for goods, Bandar Imam Khomeini and Bandar Abbas.

The ships are carrying cargoes including soybeans and corn mostly from South America, the sources said. The grain vessels are also visible through ship tracking data.

“There are no restrictions on humanitarian business, but you can’t get paid for it,” one European source said. “You can be waiting for months to get a payment.”

Another source said: “There is nervousness among traders about making more sales to Iran before the backlog (of ships) is cleared.”

A senior Iranian port official, who declined to be named, told Reuters there had been problems since U.S. sanctions were imposed on its financial system in November 2018.

“What has changed is that now the number of banks, traders that are staying away from doing business with Iran is increasing,” the official said.

Separate U.S. sanctions imposed in September on Iran’s central bank – following attacks on oil facilities in Saudi Arabia that U.S. officials blamed on Tehran – have added to difficulties with transactions.

The Iranian port official said these latest sanctions would scare away banks.

“Some small banks that we used to work with have informed us that they will no longer do business with us,” he added, declining to name the banks.

An official with Iran’s agriculture ministry said separately that Tehran had since the 1980s aimed to ensure the country had sufficient stocks of grain.

“We have increased the amount of stockpiles because of Trump’s policy towards Iran and tensions in the past months,” the official said. “It is becoming more and more difficult because of the sanctions.” 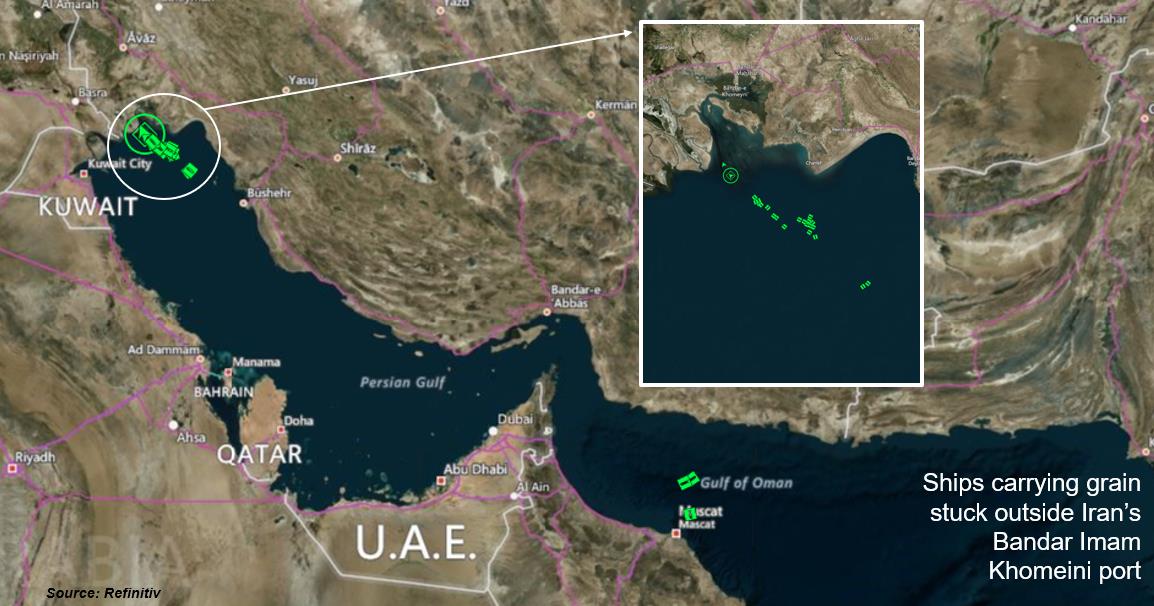 Trade sources said Iranian ports were also struggling to process ships due to a lack of available berths.

Of the vessels still anchored, at least 20 dry bulk ships were waiting outside Bandar Imam Khomeini, Refinitiv data showed. A further two vessels had managed to discharge their cargoes after waiting for weeks, the data showed.

Separate data from shipping intelligence platform MarineTraffic showed a similar number of ships stationary for more than a month.

A separate Iranian government official confirmed that ships were waiting but declined to give details.

Trade sources said Turkey’s Halkbank (HALKB.IS) – one of the main banks that Iran has relied on for such humanitarian trade – had not been able to process payments fast enough because of the complexity of the process and in some cases did not complete transactions with suppliers. Halkbank declined to comment.

Suppliers have been left with additional costs, known as demurrage, of up to $15,000 a day as they wait to unload.

Trade sources said U.S. agribusiness group Bunge and China’s COFCO International were among the companies affected, together with smaller Turkish and Iranian suppliers.

Trade sources told Reuters in December that Bunge and rival U.S. group Cargill [CARGIL.UL] as well as other suppliers had halted new food supply deals to Iran due to payment issues.

Cargill [CARGIL.UL] said in a statement: “In certain countries where international sanctions exist, we provide that food using the humanitarian exception for medicine and food.”

A U.S. Treasury spokesperson said Washington designated Iran’s central bank under its counter terrorism authorities, adding that the broad exceptions to the sanctions such as for humanitarian trade that once applied to transactions involving the central bank no longer applied.

The spokesperson also said the department continued to encourage the private sector and foreign counterparts to provide humanitarian assistance, if the transactions were conducted with Iranian financial institutions or entities that have not been blacklisted by Washington.