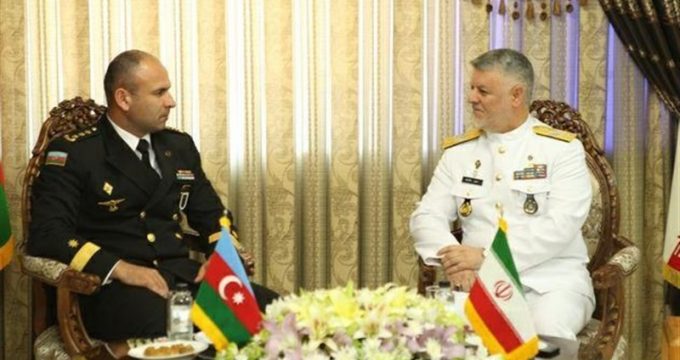 Tasnim – Commander of the Iranian Navy Rear Admiral Hossein Khanzadi voiced the country’s readiness to assist the Republic of Azerbaijan’s Navy in the efforts for peace and security.

In a Wednesday meeting with his Azeri counterpart in Tehran, Rear Admiral Khanzadi hailed the close ties between Tehran and Baku, stressing the need for collective action to ensure regional peace and maritime security.

He also noted Iran has great capabilities that could be shared with the Republic of Azerbaijan’s Navy.

Describing the Caspian Sea as the sea of peace and friendship, Khanzadi said, “We can share military tactics with each other, and are fully ready to promote ties between the two countries.”

The Iranian commander added that reciprocal visits by the naval flotillas of the two neighbors and participation in military games could help grow the bilateral relations.

For his part, the Azeri admiral emphasized the necessity for the protection of the Caspian Sea security, noting that close cooperation among the neighboring states would help fight against piracy.

He also expressed the Azeri Navy’s readiness to hold a joint drill with Iran to exercise maritime rescue and relief operations.

In February 2018, Iranian Defense Minister Brigadier General Amir Hatami paid a visit to Azerbaijan to weigh plans for the enhancement of military cooperation.

Azeri President Ilham Aliyev has paid several official visits to Tehran over the past few years.