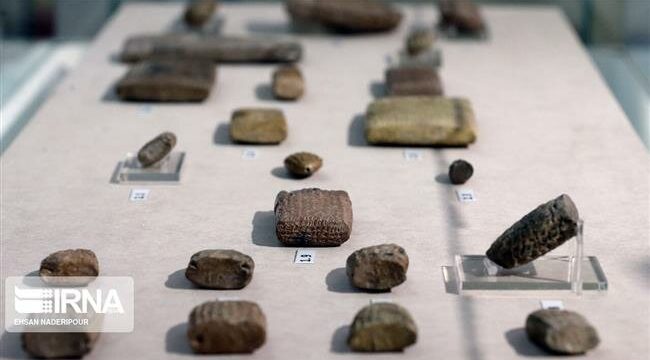 Iran displays 300 Achaemenid tablets returned from US after judicial saga

Press TV – The National Museum of Iran is exhibiting some 300 cuneiform tablets returned from the United States following a judicial saga.

Originally from the ruins of Persepolis, capital of the Persian Achaemenid Empire (559–330 B.C,) in southern Iran, these works belong to a batch of 1,783 tablets or pieces of clay tablets returned Monday by the Oriental Institute of the University of Chicago.

In the 1930s, the university had received from Iran on loan some 30,000 tablets or pieces of tablets found in Persepolis, for research purposes, according to the Iranian press.

A large portion of the tablets were returned to Iran three times between 1948 and 2004, before the restitution was blocked by legal action of US survivors of a 1997 bombing in Israel blamed on the Palestinian resistance movement of Hamas.

Reprimanding Tehran for supporting the group, the plaintiffs demanded the seizure of the tablets and their sale in order to recover a sum of $71.5 million that Iran was sentenced by a US court to pay in this case.

The proceedings only ended in February 2018 with a US Supreme Court decision to ban the seizure of the tablets.

“In 2001, we asked the University of Chicago to return the Achaemenid tablets. They sincerely returned all the studies they had done on these works along with 300 tablets to Iran over the past years,” said Mohammad Reza Kargar, director general of Iranian museums, IRNA reported.

“At the same time, we signed a memorandum of understanding so that the remaining tablets will be returned within two years. The news was circulated internationally, and some seeking compensation from Iran prevented it but they were not from the US government and officials,” he added.

He noted that Iran and the University of Chicago tried hard to win the case, though the process of was lengthy, adding, “In the end, we were sure that no vote would be taken to confiscate cultural property of other countries.”

Mohammad-Hossein Talebian, deputy chairman of Iran’s Cultural Heritage Organization (CHO), also said that Iranian lawyers were trying to speed up the return of other Achaemenid tablets from the United States.

Meanwhile, Christopher Woods, director of the Oriental Institute of the University of Chicago, said, “The idea was always to return the tablets. They were on loan on us and we were entrusted with that cultural heritage. And we have a long history of borrowing objects and always returning them. So the Oriental Institute always returns objects that we were entrusted with as loans.”

“We fought very hard to keep them safe, spent millions of dollars so that we could return them [to Iran,” added Woods, stressing, “This was a decision we made with our Iranian colleagues to first learn the process, return the first batch and hopefully we will return the second batch much faster.”