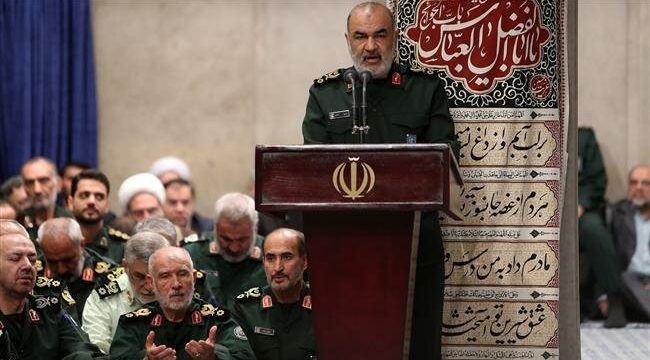 Press TV – The chief commander of Iran’s Islamic Revolution Guards Corps (IRGC) has warned the Israeli regime against waging a new war, saying any such “mistake” will lead to the occupying entity’s annihilation.

Major General Hossein Salami, who was speaking during a meeting of Leader of the Islamic Revolution Ayatollah Seyyed Ali Khamenei with senior commanders of the IRGC on Wednesday, said the Israeli regime is no longer viewed as a threat thanks to Iran’s enhanced deterrence power.

“Any new war will lead to the total disappearance of this regime from the world’s political geography,” he warned. Israel, he added, is well aware that any small mistake “will be its last.”

He also cautioned certain regimes in the region against making any “miscalculation” about Iran’s power.

“The evil regimes of the region also know that if they miscalculate the power of [Iran’s] Establishment and Revolution and [take] any unwise action, they will quickly be trapped on an uncontrollable and irreversible path of destruction,” he said.

The Iranian commander further praised Iran’s “strategy of active resistance” devised by Ayatollah Khamenei, saying it has successfully helped offset the pressure the enemies have been exerting on Iran during their economic war.

Earlier on Monday, Salami said Israel was on its path toward collapse because of various weaknesses that are intrinsic to it and external regional forces that seek its annihilation.

He said the Tel Aviv regime has many enemies in the region, which “all want, in fact, its elimination from the political geography and therefore this will happen naturally.”