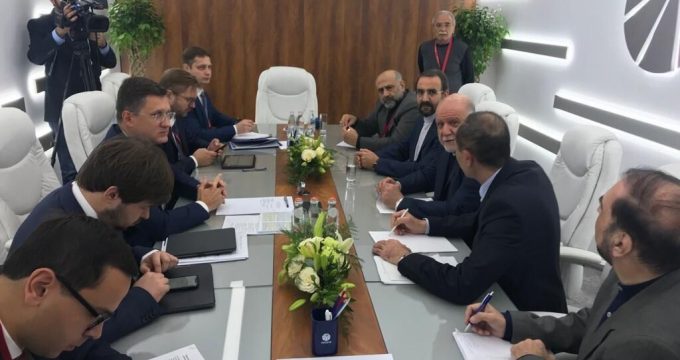 IRNA – Iran’s Minister of Petroleum Bijan Zangeneh and Russia’s Minister of Energy Alexander Novak met on Wednesday on the sidelines of the 21st Ministerial Meeting of the Gas Exporting Countries Forum (GECF) to discuss issues of mutual interests.

Zangeneh and Alexander Novak stressed expansion of ties in the field of energy.

The Russian Energy Week International Meeting will also be held in Moscow.

Russian President Vladimir Putin is scheduled to elaborate on the aims and status of energy industries in Russian policies, threats and prospects of the mentioned industry.

Dramatic fall of the Saudi oil output due to destruction of the Saudi oil installations by drone attacks of the Yemeni fighters and sudden increase in oil prices prompted to convene the Russian Energy Week International Meeting.

The Gas Exporting Countries Forum is an intergovernmental organization of 11 of the leading natural gas producers made up of Algeria, Bolivia, Egypt, Equatorial Guinea, Iran, Libya, Nigeria, Qatar, Russia, Trinidad and Tobago and Venezuela.