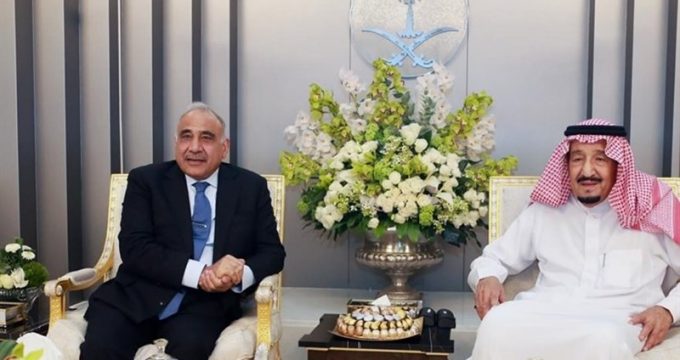 Tasnim – Saudi Arabia has given a green light to Iraqi Prime Minister Adel Abdul Mahdi to arrange a meeting with Iran as a first step towards de-escalating tensions in the region, a report said.

Abbas al-Hasnawi, an official in the Iraqi prime minister’s office, told Middle East Eye on Tuesday that Abdul Mahdi was mediating between the leaderships in Riyadh and Tehran and had communicated each side’s conditions for talks to the other.

Hasnawi was speaking after a spokesperson for the Iranian government said on Monday that Saudi Arabia had sent messages to Iranian President Hassan Rouhani via “the leaders of some countries”.

Hasnawi confirmed that Abdul Mahdi was acting as an intermediary with the aim of easing tensions since attacks on Saudi oil facilities earlier this month appeared to have tilted the Persian Gulf rivals closer to open conflict.

“The Iraqi leadership has channels with both sides. Our Sunni brothers (in the government) liaise with the Saudis and our Shiite brothers with the Iranians,” he said.

“The Saudis have conditions before the negotiations process starts and the same with Iranians. We have liaised these conditions to each side. It is not an easy task to get together two opposite sides in terms of their ideology, sect and their alliances in the region.”

Hasnawi said Abdul Mahdi had called for a meeting between Saudi Arabia and Iran which the Iraqi government would supervise and mediate, with Baghdad as its preferred venue.

“The Saudis have given the green light in this matter, and Mr Abdul Mahdi is working on it,” said Hasnawi, adding that Saudi Arabia, including Crown Prince Mohammed bin Salman, had “calmed their rhetoric” in recent days.

Abdul Mahdi was last week in Jeddah for talks with the Saudi crown prince.

Hasnawi said that the US government had also approved negotiations between the two sides. Falih Alfayyadh, Iraq’s adviser for national security, is currently in Washington to discuss a timeline for the meetings, he added.

“If there will be a potential deal in the region that includes Yemen, Syria and Iraq, the Americans have no problem with that,” Hasnawi said.

Hasnawi said Abdul Mahdi hoped to host a meeting in Baghdad but a location had yet to be agreed.

“Baghdad is the best place for this meeting, but I can’t confirm it will be. In the beginning, there will be meetings between officials of both countries, and then a deal will be made. Leaders of Saudi Arabia and Iran will meet to sign it.”

Hasnawi said that both sides had set out conditions as a starting point for negotiations.

The back-channel contacts between Riyadh and Tehran follow this month’s devastating attacks on Saudi oil fields, which Saudi Arabia and the US have blamed on Iran.

Iran denies involvement in the attacks, which have been claimed by Yemen’s Houthi Ansarullah movement.

In an interview with the CBS network broadcast on Sunday, Mohammed bin Salman said that “a political and peaceful solution is much better than a military one”.

He suggested that a war between Saudi Arabia and Iran would mean the “total collapse of the global economy”.

“We welcome Mohammed bin Salman being quoted as saying he wants to resolve issues through talks with Tehran,” Larijani said.