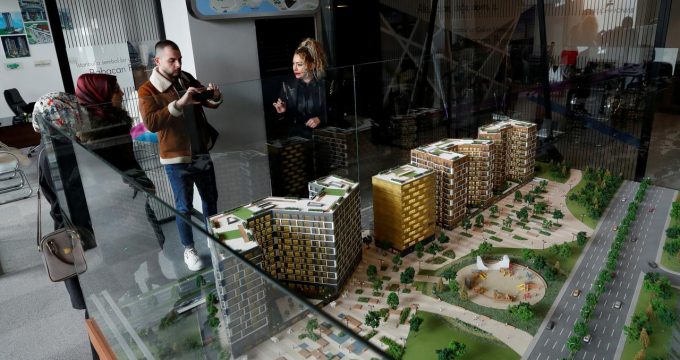 Reuters | Emily Wither, Ezgi Erkoyun: Iranians in Turkey are finding ways to sidestep laws in their home country to buy properties and get Turkish passports, hoping to protect their savings even as the United States ramps up sanctions on Iran.

As they find ways around Iran’s money-transfer restrictions, the spike in home-buying has propelled Iranians to become Turkey’s second-largest foreign property buyers, behind only Iraqis.

Hundreds of professional Iranians have been forced to make “dodgy money transfers” simply to get by, said one former electrician shop owner who now helps his countrymen buy homes in Istanbul.

Interviewed in a housing complex of towers and shops where Farsi was heard as much as Turkish, he said he is not proud of his work which involves helping Iranians transfer money out of their country for which he receives a commission.

Some of the transactions he makes for his fellow countrymen are illegal and he knows that if he returned home he would be arrested for money laundering.

“There is no way to do it legally, so we help them transfer the money,” he said under condition of anonymity. “Who am I to be doing this? A bank should actually be doing this job.”

Washington’s policy of “maximum pressure” sanctions meant to cripple Iran’s economy and force concessions over its nuclear program have prompted Tehran to limit the foreign currency citizens can hold outside banks.

But that and other measures meant to support the Iranian rial have been widely disobeyed, analysts say, prompting the government to resort to bartering to keep the economy afloat.

According to five Iranians who spoke to Reuters about property-buying in neighboring Turkey, they are attracted because of the similar Muslim-majority culture and the ease of registering businesses as foreigners in a country that does not recognize U.S. sanctions on Iran.

After last year’s currency crisis tipped Turkey’s economy into recession, the Turkish government made it easier for foreign nationals to gain citizenship, slashing the property investment threshold to $250,000 from $1 million.

The lifetime passport offer, for foreigners who commit not to sell for at least three years, is meant to keep money flowing into an economy that was driven for years by a foreign-funded construction boom.

But for middle-class Iranians, property ownership presented an escape from difficulties back home and a safe haven from U.S. sanctions, which Washington increased again two weeks ago by targeting Iran’s central bank.

“I have a lot of friends and acquaintances who have bought houses in Istanbul and Izmir. People are thinking about buying houses as a plan B,” said Ali Asgarzade, an Iranian lawyer who plans to move his family from Tabriz to Istanbul due to economic conditions.

Asgarzade said he found the price of baby formula in Iran baffling because it tripled in a matter of months after the reimposition of sanctions. He then decided Turkey was the right choice for his family.

The number of properties Iranians purchased in Turkey almost doubled in the first eight months of the year, according to official data. Adjusted for inflation, the residential property price index fell by 11.2% tmsnrt.rs/2nldtYY year-on-year in July.

The cheaper prices may have accelerated a shift in which Iranian home buyers are looking less at Western property markets, while Iranian companies are investing less in the Gulf. 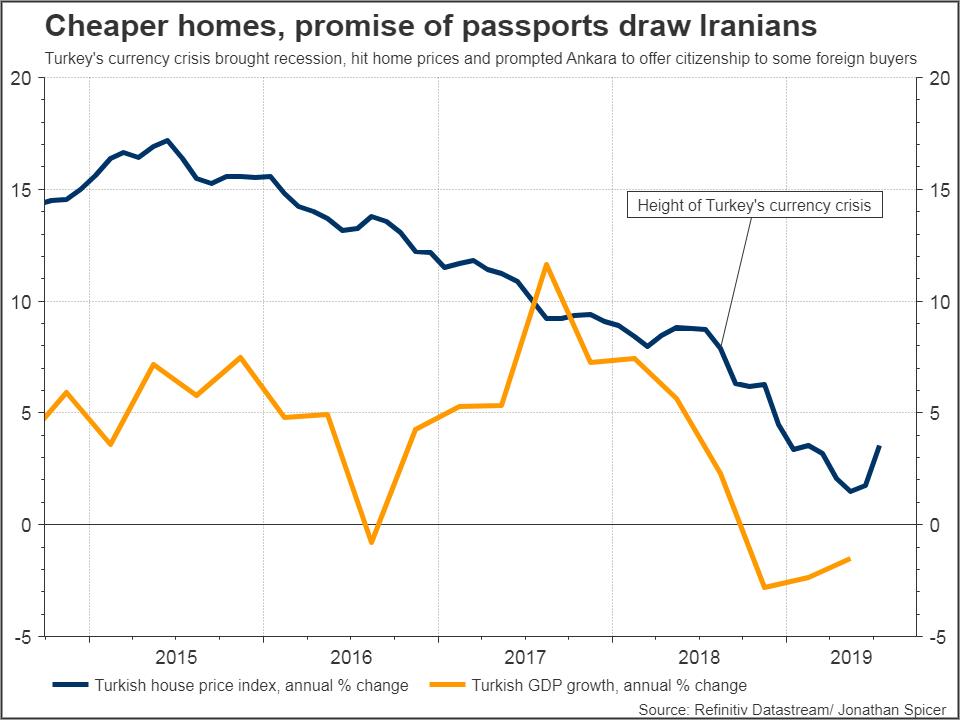 Fatih Cayabatmaz, manager at VIP Turkish Pass, a consultancy company assisting foreign nationals to apply for Turkish citizenship through investment, said Iranians used to purchase in the United States, Canada or Europe. But U.S. policies seen as anti-immigration and rising xenophobia in Europe have convinced them to look closer to home.

“We are seeing that there has been an increased interest (by Iranians) toward Turkish citizenship,” Cayabatmaz said.

He said it helps that Turkey easily grants foreigners tax ID numbers, with which they can buy properties and establish companies. “It is as simple as that,” he said. “Turkey’s bureaucratic processes are almost zero when it comes to foreigners.”

More than 981 foreigners became Turkish citizens since September last year, when Ankara lowered the investment threshold for citizenship, according to state-owned Anadolu news agency. Over 250 of them were Iranians.

The former shop owner who declined to be named said hundreds of companies exist “on paper” in Turkey only so that Iranians can move money, adding that he had registered some including a licensed jeweller and a pharmaceutical company.