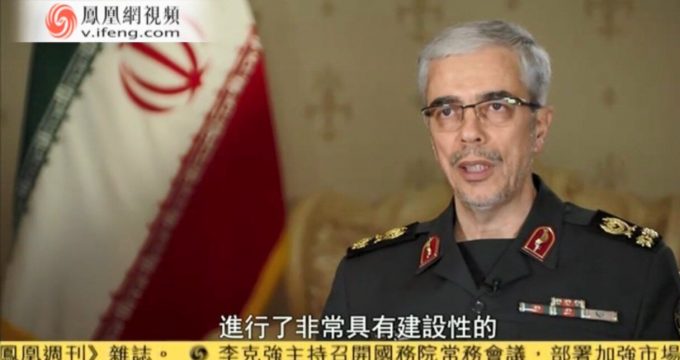 Iran is more interested in Persian Gulf security than others: Senior commander

IRNA – Commander of Iran’s General Staff of the Armed Forces Major General Mohammad Bagheri said on Wednesday that Iran is very interested in maintaining the security of the Persian Gulf and the Strait of Hormuz and strongly avoids any conflict with any country in any part of the world.

“Iran is not interested at all in any war or conflict in any part of the region,” said Major General Mohammad Bagheri, Chief of the General Staff of the Iranian Armed Forces in an interview with Phoenix Hong Kong Channel aired on Wednesday.

Tehran is to strongly deal with any destabilizing efforts in the region, the commander said.

“Iran has always sought for peace during the past three centuries without having any greed on other countries,” he told the Hong Kong TV network.

The Iranian top military official explained that Iran has always defended itself in all wars that have been waged against the country, he said.

“We are interested in the security of the Persian Gulf more than any other country because secured exploitation and export of oil resources and other commodities will be to our interests and to the same reason the securely of the Strait of Hormuz helps us materialize such goal” said Major General Bagheri, adding that “Iran isn’t interested in any conflict in the Persian Gulf or the Strait of Hormuz”.

He went on to stress that his country “will stand with authority” against actions that seek to destabilize the Persian Gulf, Strait of Hormuz or the Sea of Oman.

Tensions have spiked recently in the strategic Strait of Hormuz, through which nearly 30% of the global crude passes.

“Iran wants peace for the region that’s why we are the most important country responsible for the security of the Strait of Hormuz and will defend itself and its neighbors against insecurity,” he underlined.

The US spared no efforts to forge a coalition of European and several regional Arab countries to “secure the freedom of navigation in the Persian Gulf”. Washington hasn’t been successful so far as many countries avoid to join the mission, he said.

To thwart the conspiracy, Iran has proposed Hormuz Peace Endeavour (HOPE), an initiative that helps the Persian Gulf’s Arab littoral states to resolve differences based on dialogue and sign non-aggression and non-interference pacts to bring about security in the region, he said.

According to the Iranian official, the US and its allies never dare to launch war against Iran because of the huge losses that will be inflicted on them.

“They don’t dare to wage war, neither do we welcome a conflict but we are prepared for defense. We have the necessary courage and Iran’s armed forces are ready for any situation,” Mohammad Bagheri said.

He noted that any war or conflict in the region will be illogical but he didn’t rule it out totally, reminding that dictators such as Iraq’s Saddam Hussain and Germany’s Adolf Hitler launched attacks although all odds were stacked against them.

Chief of the General Staff of the Armed Forces of the Islamic Republic of Iran rejected reports that Iran has supplied Yemen’s revolutionary group the Houthi Ansarullah with weapons, saying the country is under “a cruel siege by Saudi Arabia” that has blocked entrance of humanitarian aid. “However, military aides of Iran’s Islamic Revolution Guards Corps (IRGC) in the form of military advise are helping the Yemenis to resist the Saudi aggression,” he was cited as saying by the Phoenix Hong Kong Channel.

Bagheri stressed that the US doesn’t seek logic in its foreign policy because “they have sanctioned a country’s foreign policy chief and always say they are seeking a dialogue. This isn’t logical”.

The White House sanctioned Iran’s Foreign Minister Mohammad Javad Zarif after the latter refused to meet in person with US President Donald Trump at the Oval Office back in July. However, Washington has been reiterating that it wants to sit down for talks for “a better deal” with Iran. Tehran says the US needs to get back to the 2015 nuclear deal, from which it pulled out in May last year.

Bagheri denounced the US sanctioning of the IRGC, saying that it has withstood “all US plots” to destabilize Islamic states of the region by creating the terrorist group DAESH, also known as the Islamic State.

He stressed that such sanctions have not left any impact on the IRGC as it does not have any banking accounts in other countries. “This proves that the Zionist regime and its regional allies and some radical groups in the US and Washington have done whatever they were able to do”.

Iran and China are getting closer these days as both have ambitions to counter the US in the region. Bagheri’s visit to China is a significant signal of this close ties.

Iran has invited China to take part in a joint naval drill with Russia in the north of the Indian Ocean and the Sea of Oman.

“We will take some steps to produce joint defense products and both armies will bring about a more stable world,” Bagheri noted.