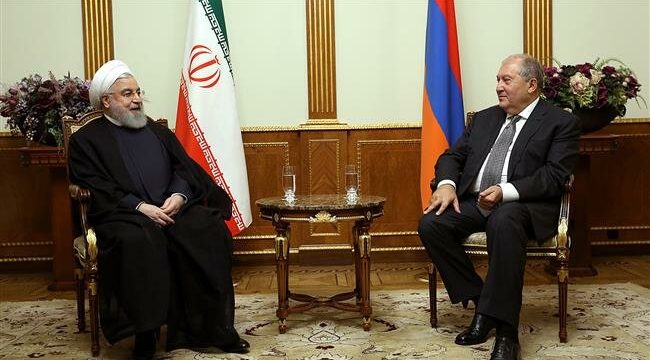 Enhanced ties with ‘all neighbors’ tenet of Iran’s foreign policy

Press TV – Iranian President Hassan Rouhani says promotion of relations with “all neighbors”, including Armenia, is among the tenets of the Islamic Republic’s foreign policy.

He made the remarks on Monday in a meeting with his Armenian counterpart Armen Sarkissian in Yerevan, where he is visiting to attend a meeting of the Eurasian Economic Union (EAEU).

Rouhani highlighted the cultural and historical commonalities between Iran and Armenia, and described it as a good opportunity for “all-out sustainable relations” between the two states.

“The Islamic Republic of Iran and Armenia enjoy great potentialities and capacities in various fields including transit and transportation, tourism, and industry, which can be tapped into to serve the two nations’ interests,” he noted.

He also pointed to Iran’s membership at the Eurasian Economic Union, and described it as a good opportunity for enhancement of economic ties between member states.

Before leaving Tehran for Yerevan, Rouhani had noted that joining the EAEU provides the country’s public and private economic sectors with a very good opportunity to develop their foreign trade activities.

He said Iran’s joining the EAEU would be a very good opportunity for the private-sector business-people as well as the public economic sector to expand trade ties with the five member states of the union and to connect to the economy of other regions.

“This is a very important step under the circumstances that the Americans cruelly seek to apply pressure and sanctions on the Iranian nation and Iran’s foreign trade,” the Iranian president said.

The EAEU provides for free movement of goods, services, capital and labor, pursues coordinated, harmonized and single policy in the sectors determined by the treaty and international agreements within the union.