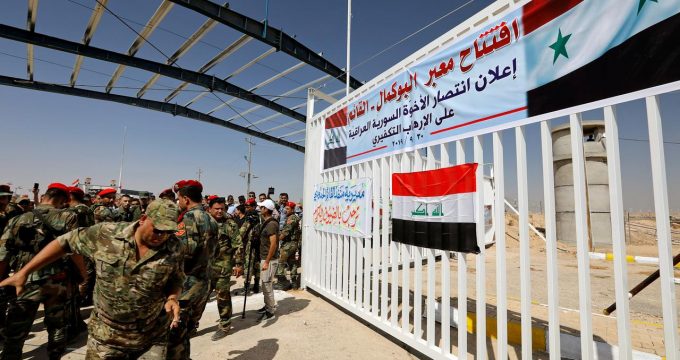 Reuters – Iraq reopened its Qaim border-crossing with Syria on Monday after eight years of closure amid regional turmoil, in the latest sign of normalization between Baghdad and Damascus and a win for their mutual ally Iran.

The crossing, which Iraqi officials declared open for travelers and trade, is crucial for Iran’s bid to cement its growing sway over a corridor of territory from Tehran to Beirut.

The opening of the crossing signified “the victory of the Iraqi and Syrian people over all terrorist groups, especially Daesh,” said Syrian Interior Minister Mohammad Khaled al-Rahmoun, using a term for Islamic State.

It would revitalize Syrian-Iraqi economic cooperation, said Iraqi border authority chief Khadhim al-Ikabi, who like Rahmoun was attending a ceremony with local governors of provinces on both sides of the border, a Reuters journalist said.

The western Anbar province town of Qaim, 300 km (185 miles) west of Baghdad, was recaptured from Islamic State in November 2017 and was the group’s last bastion in Iraq to fall.

It borders the Syrian town of Albukamal, which was also an Islamic State stronghold. The towns lie on a strategic supply route and the crossing between them had only been open for government or military traffic since 2011.

The Syrian government, with strong backing from Iran-backed militias, captured Albukamal on the Euphrates River from Islamic State towards the end of 2017.

The Iraqi side of the border had seen the deployment in large numbers of Iran-allied Iraqi Shi’ite militias known as the Popular Mobilisation Forces (PMF) who now de facto control large stretches of the frontier, with posts not far from military bases housing U.S. troops.

The PMF will take part in securing the crossing, a security source in Qaim told Reuters.

Syrian territory across from Albukamal on the eastern side of the river is held by the U.S.-backed Syrian Democratic Forces (SDF) militia.

The positioning of Iran’s allies on both sides of the border and within close proximity to U.S. and allied forces further raises tensions between Washington and Tehran who have been locked in a tense standoff over the latter’s nuclear program and regional activities.

Tensions escalated after the U.S. withdrew last year from a 2015 nuclear deal and reinstated sanctions against Tehran.

On the Syrian side, the border crossing was decorated with Syrian flags and portraits of President Bashar al-Assad, footage broadcast by state TV station al-Ikhbariya showed.

The opening of the crossing was a “historic day” for Iraq and Syria, Ali Faris, a local politician, told the station, adding that there would be “great economic and social” consequences.

Al-Ikharbiya’s correspondent said the crossing was an “important economic artery”.

Islamic State in 2014 seized vast swathes of land in both Iraq and Syria, declaring a caliphate across both countries. Iraq declared victory over the group in 2017 and it lost its last territory in Syria earlier this year.

Iraq recently called for the reinstatement of Syria’s membership of the Arab League, which was suspended in 2011 over its crackdown on protesters at the start of the civil war.