MNA – The Iranian Foreign Minister Mohammad Javad Zarif has said he could not visit Iran’s ambassador to the United Nation in hospital in New York due to the US restrictions.

“Thanks to technology, I was able to see and talk to my friend of 40 years and our UN ambassador Ravanchi, who is in hospital here in New York only a few blocks away,” the top Iranian diplomat wrote in a tweet on Saturday after a video call with Iran’s Ambassador and Permanent Representative to the United Nations Majid Takht-Ravanchi, who is admitted to the hospital in the US due to his illness. 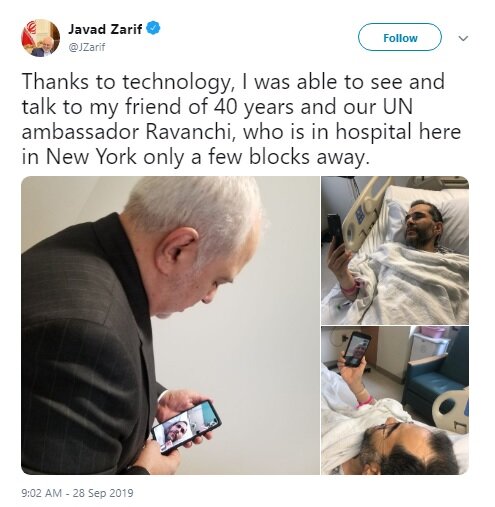 The Iranian delegation headed by President Rouhani and Foreign Minister Javad Zarif has faced illegal restrictions by the US administration while in New York to attend the 74th UN General Assembly session in the American city of New York.