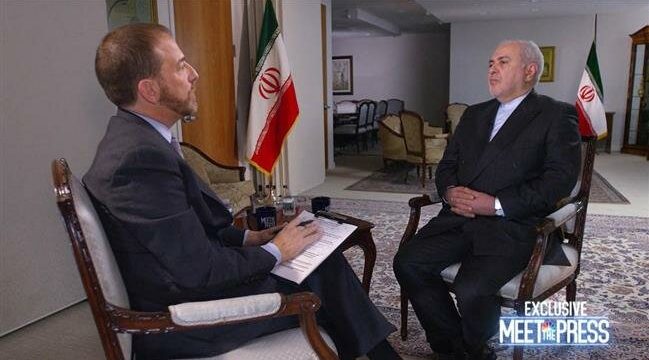 US ‘won’t be able to finish’ war against Iran: Zarif

Press TV – Iranian Foreign Minister Mohammad Javad Zarif says the United States has already initiated a cyber war against Iran, but it could not “finish” a full-fledged war if it started one against the country.

In an interview with NBC’s “Meet The Press,” which will air in full on Sunday, Zarif referred to Stuxnet, a malicious computer worm that is widely believed to be have been made by the US and Israel.

“There is a cyber war going on. The United States started that cyber war, with attacking our nuclear facilities in a very dangerous, irresponsible way that could’ve killed millions of people,” he said.

“There is a cyber war and Iran is engaged in that cyber war,” he added. “Any war that the United States starts, it won’t be able to finish.”

The Washington Post reported in June 2012 that US spy services and Israel’s military had worked together to launch the Stuxnet virus attack on a uranium enrichment facility at Natanz, Iran.

Asked whether Iran was attempting to interfere with the 2020 US presidential election, Zarif said the Islamic Republic doesn’t have a preference in the race.

“We don’t have a preference in your election to intervene in that election,” he said. “We don’t interfere in the internal affairs of another country,”

The interview comes amid heightened tensions between Iran and the US over the latter’s provocative moves in the Middle East.

President Donald Trump has said the US is “locked and loaded” and ready to respond to recent attacks on Saudi oil installations, which his administration has blamed on Iran without providing any evidence.

Washington has also adopted hostile measures against Tehran since its withdrawal from the 2015 multilateral nuclear deal, officially named the Joint Comprehensive Plan of Action (JCPOA), and the re-imposition of anti-Iran sanctions.