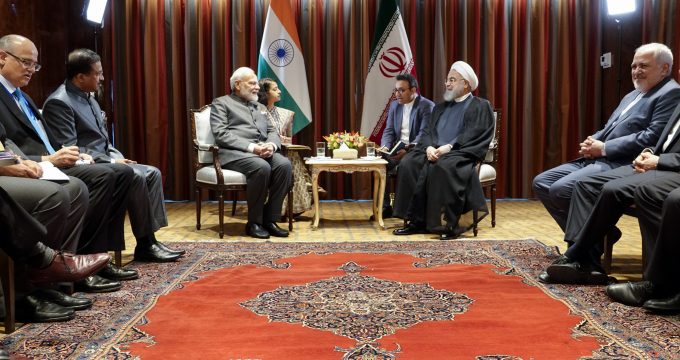 President.ir – Speaking in a meeting with the Prime Minister of India on Thursday in New York on the sidelines of the 74th session of the United Nations General Assembly, President Hassan Rouhani said, “As a very important Asian country, India has had long-standing relations with Iran”.

Dr Hassan Rouhani added, “In this regard, we can develop our relations in scientific, research and economic fields between the two countries”.

On the two countries’ efforts to overcome the recent obstacles on the way of banking and energy relations, he appreciated India’s investment in developing the first phase of Chabahar Port, saying, “Today, Iran, India and Afghanistan are enjoying the advantages of this important project, and the region’s current and future generations will benefit from it”.

Dr Rouhani also went on to call on Mr Modi to adopt an approach on the Kashmir issue for resolving people’s problems in that region.

At the same meeting, Prime Minister Narendra Modi of India referred to his recent visit to Iran and said, “My meeting with the Supreme Leader was very good and constructive, and he treated my so friendly that I felt at home”.

He also stressed that his country has always supported Iran’s right to use peaceful nuclear energy and said that India only recognises UN sanctions.

At the end of the visit, Dr Rouhani invited the Indian Prime Minister to visit Iran again.