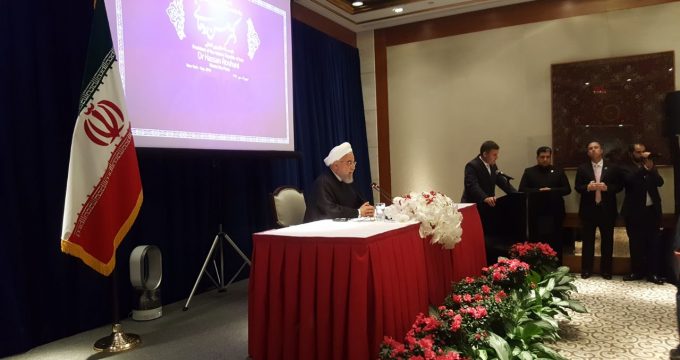 Next US elections not our concern; what’s important is for governments to live up to commitments: President Rouhani

President.ir – Speaking in a press conference with representatives of international media in New York on Thursday evening, President of the Islamic Republic of Iran said, “This year, we had a very intensive schedule, mainly discussing the Joint Comprehensive Plan of Action (JCPOA) and how to implement nuclear agreements, as well as the stability and sensitivity and the need for peace and security in the region and the end of the bloodshed in Yemen”.

The president continued, “At the 74th Session of the UN General Assembly, we presented the Hormuz Peace Endeavour (HOPE) initiative with the aim of emphasising that vis-à-vis the Persian Gulf and the Strait of Hormuz and the Sea of Oman, the only way is have a constructive dialogue between countries in the region”.

Dr Rouhani pointed out, “In some cases, we have had some success in our negotiations and in some cases we still have to pursue the matter until our efforts have bear fruit”.

Dr Rouhani continued, “Today, there is a bloody war in the region; a fruitless war against Yemen. The Yemeni people have the right to self-defence and they have to defend themselves, and the whole world knows that the Yemeni forces and the Yemeni army have both long-range missiles and drones”.

The president emphasised, “Those who accuse others must present their evidence; if the invasion was not from the south and from the north, east or west, those who claim must make their claim clear”.

“I asked some European leaders who had made false accusations about their evidence, and they said they had no evidence, but they thought the Yemeni forces were less capable than carrying out such an attack. In response, I asked them if their lack of knowledge about the Yemenis’ capabilities would lead to such conclusion and accusations,” added Rouhani.

The president added, “I even told them if you have any evidence, be sure to send them to me, and I would like to see what your evidence are, so let’s come together instead of levelling accusations, and put out the flames in the region”.

“The Yemeni people and army announced a few days ago that they were ready for a complete ceasefire, and that all activities would be stopped if Saudi Arabia and the United Arab Emirates stop their attacks,” the president said, adding, “Unfortunately, after this announcement, we are still seeing attacks on innocent Yemeni people”.

Stating that, “Yemen has used its right to defend against the Saudi aggression, why should Iran be accused?” He also went on to say, “I asked European leaders what their evidence were about Iranian interference; they had no evidence”.

“The JCPOA was the result of two years of seven-party negotiation and UN endorsement, but the US violated the UN Security Council resolution,” continued Rouhani.

“Our students were not given visas, but they entered contests online and won,” he said, adding, “Maximum pressure is the American precondition for negotiation, we will not accept that”.

Saying that, “The P4+1 pledged to execute the JCPOA,” Dr Rouhani added, “Europe proposed many financial systems, but has proven to be incapable or unwilling to act”.

He also said, “It is not possible that Europe stays in the JCPOA Iran, but only Iran pays the price,” adding, “We will continue to negotiate with the JCPOA parties, if they do not fulfil their obligations, the reduction of the commitments will continue”.

Dr Rouhani also went on to say, “The French president is looking for a solution, but when we approached the Europeans, they said that they had to get America’s approval as well!,” adding, “Other than France, other parties are working on a solution”.

“The US wanted to separate the Iranian nation from the government by the use of sanctions, but it did not succeed,” said the President.

He added, “Trump himself has chosen a way which has resulted in increasing hatred with Iranian public opinion,”

“We are OK with negotiations; if they prove their honesty and lift sanctions, conditions will be different,” continued Rouhani.

He also said, “We have spoken to the United States several times for the release of prisoners and sometimes succeed; we have released an American-Lebanese citizen but the US government has not fulfilled its obligation”.

On the issue of exchange of prisoners, Dr Hassan Rouhani said, “It is now the United States’ turn”.

Our relations with Japan are very friendly, he said, adding, “Mr Abe is still trying to lift sanctions; hopefully the US will find out that it has taken the wrong path for the past 18 months”.

“Italy is one of the most important trading partners of Iran and we continue to have close bilateral and international relations with them,” he said.

Dr Rouhani continued, “The third step in reducing JCPOA commitments was to lift restrictions on nuclear research and development, with the IAEA’s knowledge”.

Stating that, “We have not restricts or limited IAEA’s monitoring,” the President said, “Our goal now is not the level of enrichment, but faster installation of advanced centrifuges for research and development”.

He also said, “Europe’s credit plan is still on the table, but Europe’s problems are their own concern,” adding, “Our new offer in New York was the lift of all sanctions; it didn’t work out here, but we’ll continue it”.

President Rouhani also said, “The only way the United States knows is to put more pressure for negotiation, which is what keeps them away from negotiation”.

Stating that, “We are developing our relations with China in all aspects,” the President continued, “JCPOA commitments are bilateral, not unilateral”.

He also went on to say, “If the other side reduces its commitment, we will also reduce our commitments accordingly”.

The President of the Islamic Republic of Iran added, “If P4+1 now declares that it has fulfilled all its obligations, we will return to our obligations as well”, saying, “The goal of reducing Iran’s JCPOA obligations is to implement it”.

“Both the security of Turkey’s borders and Syria’s territorial integrity must be maintained,” he said, continuing, “Americans must get out of Syria, Idlib must be cleared of terrorists, and the Syrian army must take the security of its northern borders”.

Dr Rouhani stated, “I advise the US not to engage in missile talk, or they will come out indebted,” adding, “US arms sales in the region have created imbalances in the region”.

“Legal proceedings will continue and the Stena Impero will be released,” said President Hassan Rouhani.

He added, “Continuation of Yemen’s war is not in anyone’s interest; problems with Saudi Arabia will be settled more properly if a ceasefire is established”.