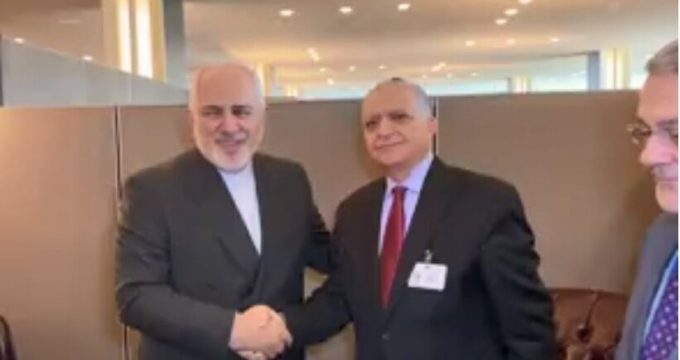 IRNA – The Foreign Ministers of the Islamic Republic of Iran and Iraq discussed mutual cooperation on the sidelines of the UN summit.

Mohammed Javad Zarif had a meeting with Mohammad Ali Alhakim his Iraqi counterpart at the United Nations on Friday morning (local time) to discuss bilateral, regional and counterterrorism issues.

Zarif had earlier met with his Syrian and Kuwaiti counterparts to discuss the Syrian-Yemeni crisis.

He also attended a meeting of the Economic Cooperation Organization (ECO).

The Iranian Foreign Minister is scheduled to meet his Dutch and Armenian counterparts.

Zarif has been in New York for the 74th session of the United Nations General Assembly.

Mohamed Ali Alhakim, Mohammad Javad Zarif, UNGA, UNGA 74 September 27, 2019
Rouhani says he rejected US offer to lift sanctions made in message to Europeans
US court orders release of jailed Iranian woman after 27 months behind bars in Australia, US