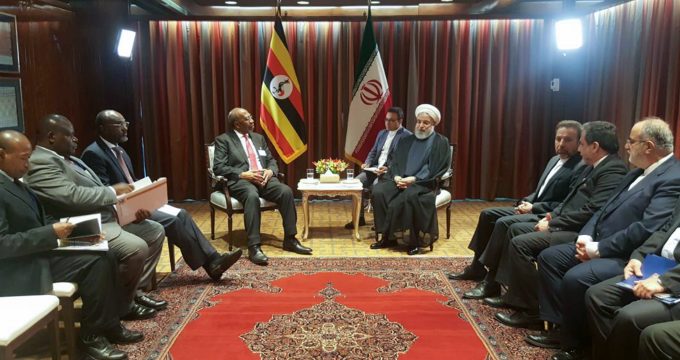 In a meeting with the Prime Minister of Uganda; President Rouhani invited to attend South-South Summit

President.ir – In a meeting with the Prime Minister of Uganda on Thursday in New York on the sidelines of the 74th session of the United Nations General Assembly, President Hassan Rouhani referred to the good relations and cooperation between the two countries in different fields and stressed development of these relations.

Dr Hassan Rouhani also referred to the importance of banking relations between the two countries and described these relations a very important step for development of economic cooperation.

On Hormuz Peace Endeavour (HOPE) Initiative, the President said, “It will be hard to expect a serious change in the current conditions of the region until the Americans do not reach the conclusion that war in Yemen and supporting Saudi Arabia and Emirates is fruitless”.

The President also referred to the Zionist Regime’s continuous acts of aggression towards the people of Palestine, Lebanon, Syria and recently southern Iraq, saying, “If they want to respond to these daily attacks, we will witness new conflicts in this region”.

He also delivered the message of the President of Uganda to Dr Rouhani inviting him to attend the coming South-South Summit in Uganda.

Hassan Rouhani, Ruhakana Rugunda, South-South Summit, UNGA, UNGA 74 September 27, 2019
Next US elections not our concern; what’s important is for governments to live up to commitments: President Rouhani
Zarif meets with Polish counterpart on sidelines of UNGA in NY