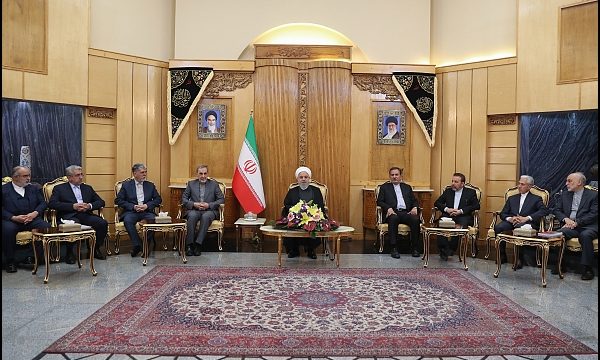 Press TV – Iran’s President Hassan Rouhani says the Europeans, who had blamed Iran for the recent attacks on Saudi oil facilities, have told him they did not know who was really behind the raid.

Speaking on Friday upon arrival in Tehran after a visit to New York, Rouhani said during the trip he questioned some European leaders about their recent anti-Iran statement, in which they had somehow claimed Iran was responsible for the attacks on Aramco facilities.

“I asked them on what basis and evidence they were making such an allegation against Iran. I frankly and firmly told them to send me the evidence as I needed it,” Rouhani said.

“They replied based on the investigations conducted by their experts, the capabilities of Yemenis, or as they say the Houthis, are less than [what required for] this operation,” he added.

“I said alright, let’s suppose they were not that much capable. Then who did it? They said they didn’t know, but the attack had been launched from the north and the west” of Yemen, Rouhani said.

Rouhani said he questioned the logic of the Europeans’ argument, and told them they lacked enough information about the Yemenis’ capabilities.

“I told them your information about the enemies of Yemen is very much, because you provide their arms. But you don’t know about the capabilities of the Yemenis and the Houthis,” he added.

Rouhani said he warned the Europeans against the consequences of raising such baseless allegations. “Do you understand the meaning of the accusation? It means chaos and fanning the flames of sedition and fire in the region,” the president asked the Europeans, he said on Friday.

“They did not have any answer. I said I’ll be waiting in Tehran to receive your evidence,” he added.

On September 14, Yemen’s Ansarullah movement and their allies in the Yemeni army deployed as many as 10 drones to bomb Abqaiq and Khurais oil facilities run by the Saudi state-owned oil company Aramco.

The unprecedented attack knocked out more than half of Saudi crude output, or five percent of global supply, prompting Saudi and US officials to claim without any evidence that it probably originated from Iraq or Iran.

The United States and Saudi Arabia have, to various degrees, blamed Tehran for the attack on Aramco installations.

In a joint statement on Monday, French President Emmanuel Macron, German Chancellor Angela Merkel and British Prime Minister Boris Johnson joined the US and Saudi Arabia in pinning the blame for the attack on Iran.

The three countries — which remain party to a 2015 nuclear deal with Iran despite the US unilateral withdrawal last year — urged Iran to engage in dialog and “refrain from choosing provocation and escalation.”

In reaction, Tehran strongly condemned the “destructive” and “provocative” claims made by the E3, warning that the trio will be responsible for the consequences of such “irresponsible” statements.

In a statement on Tuesday, Iran’s Foreign Ministry said it is “highly destructive and provocative” in itself to hold a third government responsible for an attack that was carried out during an all-out war between Saudi Arabia and Yemen, while the latter has claimed responsibility, let alone rushing to conclusions without any probe and only based on “a ridiculous rationale.”

It added that such remarks and measures would only fuel the flames of the Yemen war and may lead to its expansion.