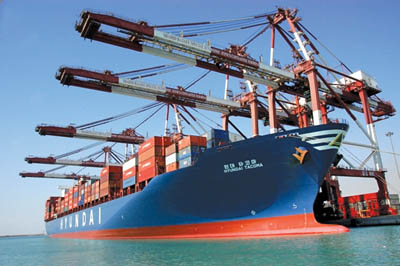 Financial Tribune – The construction of Shahid Rajaee Port’s new mechanized mineral terminal will allow vessels with a capacity of 150,000 tons to berth there, the deputy head of the Ports and Maritime Organization of Iran said on Tuesday.

Ali Hassanzadeh made the statement at a ceremony held on the occasion of a 50-trillion-rial (440 million) build–operate–transfer (BOT) contract signed between the Ports and Maritime Organization of Iran and private sector for the construction of the terminal, which is said to be the biggest in the region.

Currently, vessels with a capacity of 60,000 tons are able to berth at Shahid Rajaee Port.

This will be the second such terminal as Life Trade Promotion Company signed an agreement with Sistan-Baluchestan Ports and Maritime Organization in May 2018 to establish Iran’s first fully mechanized mineral export terminal in Chabahar’s Shahid Beheshti Port.

Ali Hassanzadeh, Iran’s Shahid Rajaee Port September 27, 2019
The continuance of Riyadh’s false claims against Iran instead of stopping the Yemen war
Tehran has no restrictions for expanding ties with Serbia: Amir-Abdollahian