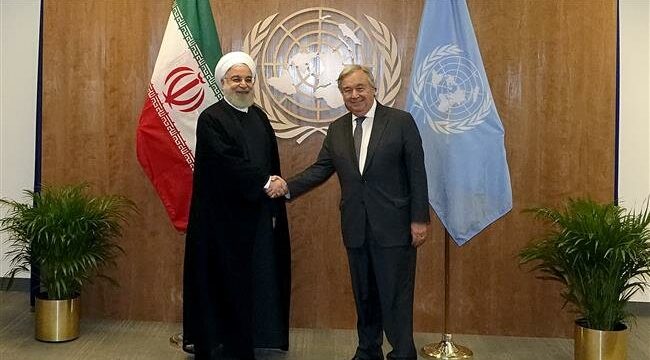 Press TV – Iran’s President Hassan Rouhani has slammed the United Nations for keeping mum on the crimes the US has been committing against the Iranian nation through an economic terrorism campaign, calling on the world body to break the silence and shoulder its responsibilities.

Rouhani made the remarks in a meeting with UN Secretary General Antonio Guterres on the sidelines of the 74th session of the General Assembly in New York on Wednesday.

Referring to Washington’s harsh campaign of economic pressure and sanctions against the Islamic Republic, the president said “an aggressor government is committing all these crimes against an entire nation, while the UN has remained tight-lipped.” He added that this “shame will remain in history.”

The Iranian nation will, however, “get over these problems like the previous ones, no matter what.”

He likewise criticized the UN’s silence on the Israeli regime’s acts of aggression against Palestine, Syria, Lebanon and Iraq, adding that the world body should change its approach and honor its obligations.

Rouhani further said Iran stands ready to continue its constructive cooperation with the UN regarding the crises in Syria and Yemen.

He highlighted the Hormuz Peace Endeavor (HOPE) — an Iranian initiative aimed at ensuring security in the Persian Gulf region in cooperation with neighbors — and said the “new, serious measure” needs the UN’s contribution.

He also voiced the UN’s full support for the 2015 nuclear deal, officially named the Joint Comprehensive Plan of Action (JCPOA), saying it is more than just an agreement as the international document has been endorsed by a UN Security Council resolution.

Separately on Wednesday, Rouhani sat down with his Iraqi counterpart, Barham Salih, in New York.

The Iranian chief executive underlined the need for both countries to implement bilateral agreements and remove impediments to developing their ties, especially in banking, energy and railway sectors.

The Iraqi president, for his part, expressed Baghdad’s resolve to boost relations with Tehran in all fields given their historic and cultural connections.

He added that the Hormuz initiative, if implemented, would help restore stability to the region.