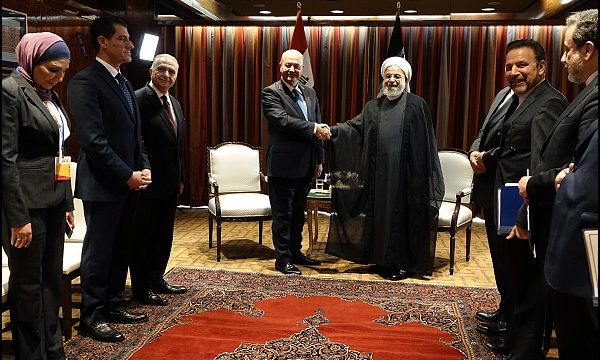 President in a meeting with his Iraqi counterpart: Cementing Tehran-Baghdad ties should boost

President.ir – Speaking with the President of Iraq Barham Salih on Wednesday evening in New York on the sidelines of the 74th session of the United Nations General Assembly, President Hassan Rouhani said, “Iraq is our friendly and brotherly neighbour and the process of developing relations between the two countries has accelerated after the recent meeting of the two countries’ authorities”.

Stating that the cooperation potentials are so much higher than the current level, he stressed that the two countries have to attempt to implement the agreements made, including the dredging of Arvandrud, describing it beneficial to both nations.

Dr Rouhani also went on to mention the Iraqi government’s good cooperation in hosting Iranian pilgrims, describing the resolve of banking relations between the two countries helpful for development of economic relations.

The President also called on the Iraqi government to remove obstacles on the path of implementing agreements in different fields, including the Shalamcheh-Basra railway and building border industrial parks.

At the same meeting, President of Iraq said, “The historical and cultural bonds between the two countries are the most important support for development of relations”.