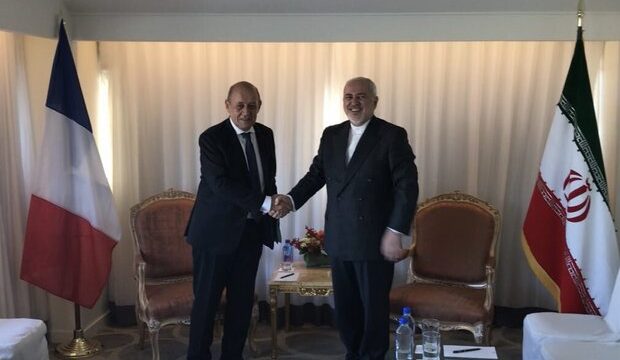 MNA – Iranian Foreign Minister met with his French counterpart Jean-Yves Le Drian in New York on Wednesday. The meeting marked their second talks in the past week.

The top diplomats, who are attending the 74th meeting of the United Nations General Assembly, had held a meeting on Sunday.

Zarif is in New York as part of the Iranian delegation accompanying President Hassan Rouhani for participating in the UN General Assembly session.

Earlier on Wednesday, foreign ministers of Iran and the five signatories to the 2015 nuclear deal one more time in a statement urged complete and effective compliance with the Joint Comprehensive Plan of Action at the end of the JCPOA arbitral joint commission meeting in New York.

The signatories also called for pursuing all-out efforts for preserving JCPOA which benefits all and Zarif described Wednesday’s meeting of the arbitral joint commission as promising.

Zarif has so far visited his Australian, Austrian, Georgian, Japanese and Pakistani counterparts.

The Foreign Minister has also conferred with the United Nations envoy for Iraq Jeanine Hennis-Plasschaert and High Representative of the European Union for Foreign and Security Policy Federica Mogherini.