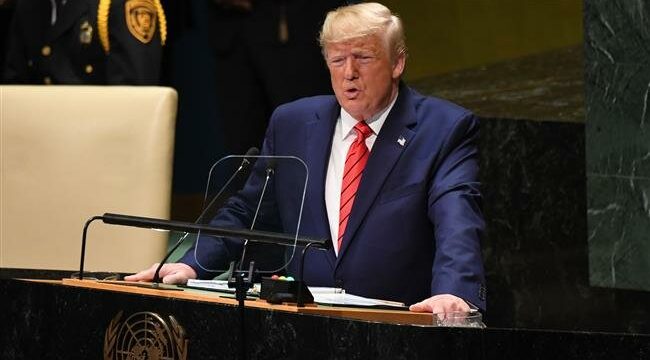 Throwing stones in a glass house: Trump criticizes the world, but his words are best applied to the US

RT | Helen Buyniski: US President Donald Trump had harsh words for socialism, Venezuela, Iran and China in his speech at the United Nations General Assembly – but many of his criticisms were best applied to his own country.

Warning of the “divide between those whose thirst for control deludes them into thinking they are destined to rule over others, and those people and nations who want only to rule themselves” – and implying the US falls into the latter category – Trump proceeded to boast about how the US is the most powerful nation in the world, and said, “hopefully we will never have to use this power.”

One can only wonder what countries like Libya, Syria, Afghanistan, Yemen and Iraq – plus the countries the US has “merely” sanctioned instead of bombing – would have to say about this magnanimous American restraint. Repeatedly lambasting Iran for its “menacing behavior” later in his speech, Trump seemed to have forgotten that he’d opened his own remarks by menacing the entire General Assembly with the world’s “most powerful military,” now “rebuilt” with $2.5 trillion in taxpayer dollars.

“One of the greatest threats facing peaceful nations today,” said the Commander-in-Chief of a military whose forces occupied 70 percent of the world’s countries in 2016, “is the repressive regime in Iran.” Iran’s citizens deserve a government that doesn’t “steal their money to fund and massacre abroad and at home,” declared the leader of a country where more than half of federal discretionary spending goes to fund the government’s military adventures.

Socialism, Trump said, wheeling out his favorite ideological punching bag, is not about a better standard of living for the poor – it’s about “power for the ruling class.” He reiterated his vow that America would never be a socialist country, even as a growing number of Americans are at least curious about how socialism might favorably compare to the current system in the US, where income equality is at an all-time high and the richest three men have more money than half the country combined. Socialism, Trump lamented, was the only thing stopping Venezuela from receiving the “vast quantities of humanitarian aid” the US had in store for it – if only it would “restore democracy” and embrace an unelected, US-backed leader from Venezuela’s own ruling class.

Iran will become “a cautionary tale of what happens when a ruling class abandons its people and embarks on a quest for personal power and riches,” Trump warned, seemingly blind to how applicable his words were to his own country. The American ruling class’s abandonment of its people has been a running theme in the last two election cycles – it’s arguably what put Trump in power, and some of his Democratic opponents are betting on it to secure their own victories in 2020.

“The US does not seek conflict with any other nation,”  Trump declared, after bashing the countries the US uses all its financial and military clout to undermine. The message was heard loud and clear: uphold your country’s sovereignty, unless it conflicts with our interests.