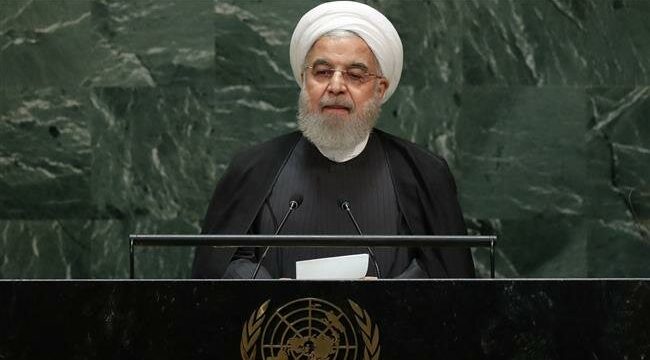 Rouhani tells US to leave region, as neighbors not outsiders can ensure own security

Press TV – Iranian President Hassan Rouhani says the US has no business and is not welcome in the region and must leave it, stressing that the security of the Persian Gulf can be ensured only by neighbors not outsiders.

“The security of the region is provided through the pull-out of American military forces not by their weapons and intervention. The ultimate way to [achieving] peace and security in the Middle East is ‘democracy inside, diplomacy outside’,” Rouhani said in an address to the 74th session of the United Nations General Assembly on Wednesday.

“Security cannot be bought or provided by foreign governments. Peace, security and independence of our neighbors are that of our own. The US is not our neighbor. It is the Islamic Republic of Iran that is your neighbor … we are neighbors to each other not with the US,” he added.

He lashed out at the US for interfering in the region. which has only fueled insecurity without bringing about any peace for regional countries.

“The United States is neither the advocate nor the guardian of any state. No state delegates power of attorney to other states and does not give custodianship to others,” the Iranian president said, adding, “The issues of the region are too big and important for the United States to deal with. A country that has failed to resolve the issues of Afghanistan, Iraq and Syria, and has been the spearhead of extremism, Talibanism and Daeshism will never be able to resolve more sophisticated issues.”

The Iranian president also warned that the Persian Gulf region is “on the edge of collapse, as a single blunder can fuel a big fire.”

“We do not tolerate provocative intervention of foreigners and shall firmly respond to any sort of act of aggression against our security and territorial integrity,” Rouhani said.

He said that Iran’s security doctrine is that of safeguarding peace and stability in the Persian Gulf and providing security for navigation in the Strait of Hormuz, adding that the safety of this vital energy route can be guaranteed provided that security becomes a common interest of all regional states.

As a steward of maritime security in the Persian Gulf and the Strait of Hormuz though its history, Iran invites all countries that are affected by developments in the strategic regions to join its initiative, dubbed Hormuz Peace Endeavor (HOPE), Rouhani said.

He said that the “coalition of hope” aims to promote peace, stability, progress and prosperity of littoral states and help achieve mutual understanding and peaceful and friendly relations among them.

“This initiative entails different sectors such as cooperation in providing collective energy security, freedom of navigation and free flow of oil and other [energy] resources from and to the countries off the Strait of Hormuz and beyond that,” Rouhani said.

He said that Iran’s proposed coalition of hope is based on commitment to the UN principles and objectives, mutual respect, mutual interests, dialog and understanding, respect for sovereignty and territorial integrity, peaceful resolution of conflicts and above all the two fundamental principles of “non-aggression” and “non-interference in the domestic affairs of each other.”

The participation of the United Nations is necessary for an international support of such a coalition, Rouhani stressed.
Before leaving for New York, Rouhani told reporters at Tehran’s Mehrabad Airport that the peace initiative is aimed at establishing long-term peace in the Persian Gulf, which he said is simply not achievable as long as outsiders are present.

According to Rouhani, the initiative will envision the provision of security for the Persian Gulf, the Sea of Oman, and the Strait of Hormuz with cooperation among Iran and other regional countries.

Back in December 2013, the United Nations overwhelmingly voted to approve Rouhani’s proposal on the World Against Extremism and Violence (WAVE).

WAVE calls on all nations across the globe to denounce violence and extremism.