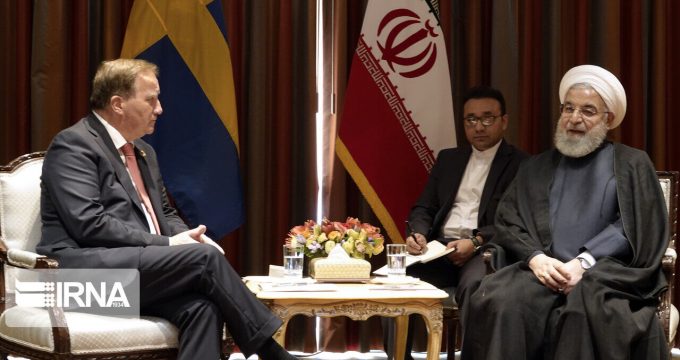 President.ir – President of the Islamic Republic of Iran and Prime Minister of Sweden met on the sidelines of the United Nations General Assembly and stressed cementing ties in all fields of mutual interest.

In a meeting with the Prime Minister of Sweden late on Tuesday in New York on the sidelines of the 74th Session of the United Nations General Assembly, President Hassan Rouhani said, “Relations between Iran and Sweden have always been good and positive, especially in industrial and trade fields, but these relations have encountered problems after the United States’ unilateral withdrawal from the JCPOA”.

Stating that the Joint Comprehensive Plan of Action (JCPOA), as an international agreement endorsed by the United Nations Security Council, has got seven pillars, and it is not acceptable that only one of them lives up to its commitments, the President reminded the European Union, including Sweden, of their commitments and full implementation of the deal, particularly INSTEX.

Dr Rouhani also described the situation in the region, and in particular the continuation of killing of innocent Yemenis, saying, “Currently, the region is in need of more peace and stability than ever before, and the Hormuz Peace Endeavour (HOPE) initiative is in the same direction”.

Referring to his recent visit to Tehran, the Prime Minister of Sweden thanked Iran’s hospitality, adding that Sweden is seeking to develop relations with Iran in all fields, especially economic.

Referring to Dr Zarif’s visit and his country’s willingness to contribute to the security of the region, Stefan Löfven welcomed Dr Rouhani’s initiative and said he would willingly look into it.

“Sweden has been a supporter of INTEX and is looking for practical ways to operate this financial mechanism as soon as possible,” the Swedish Prime Minister said.