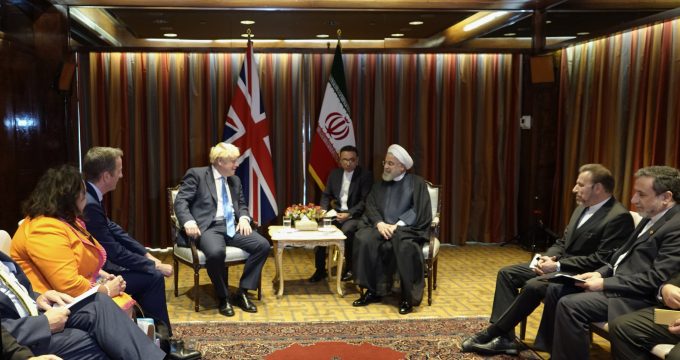 President in a meeting with the British PM: Europe must live up to its JCPOA commitments

President.ir – In a meeting with the British Prime Minister, President of the Islamic Republic of Iran slammed the recent statement by three European countries as baseless accusations, stressing that they must live up to their commitments under the JCPOA.

In the meeting that was held late on Tuesday in New York on the sidelines of the 74th Session of the United Nations General Assembly, President Hassan Rouhani referred to Britain’s history and acquaintance with the Middle East, saying, “We are very sorry about recent statement by the three European countries, which are also signatories to the Joint Comprehensive Plan of Action (JCPOA)”.

“The issuance of this baseless statement in the current critical and complicated conditions is not constructive and beneficial at all,” he said.

Dr Rouhani also criticised London’s negligence in living up to its commitment for Iran to enjoy the economic privileges of the nuclear deal, describing positive economic atmosphere as one of the commitments under the JCPOA and called on them to operationalize their commitments, including the INSTEX, as soon as possible”.

He also went on to refer to Hormuz Peace Initiative (HOPE), which will be brought about at his UNGA speech tomorrow, and described cooperation among regional countries as the only way to establish sustainable peace and stability in the region, stating that other countries’ support, including Britain, in realization of the goal.

At the same meeting, Prime Minister of Britain Boris Johnson stressed that London is willing to develop relations with Tehran, adding that his country has always supported the JCPOA and will continue to do so.

He also said that the British Foreign Minister worked hard to dissuade the United States from withdrawing from the JCPOA, but to no avail.

He referred to Iran’s effective role in the region, saying, “We still hope that the JCPOA continues to be in place and regional tensions ease”.