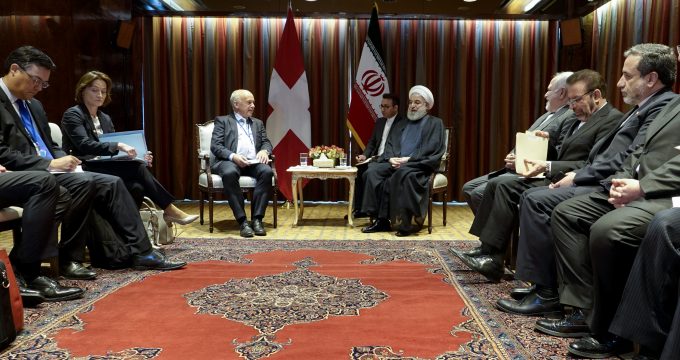 President.ir – President Rouhani met with the President of Switzerland in New York on the sidelines of the 74th Session of the United Nations General Assembly and stressed deepening Iran-Switzerland relations.

In the meeting that was held late on Tuesday, local time, President Hassan Rouhani appreciated the Swiss government’s help as Iran’s protecting power in the United States, saying, “Switzerland has always been a sophisticated country to us and we have had good long-standing relations with your country”.

Referring to Switzerland’s efforts to create a financial vehicle for economic exchanges, including buying medicine, he said, “Unfortunately, the US government creates obstacles on the path of banking exchanged between Iran and Switzerland, even in fields like medicine and humanitarian fields”.

“This US move is considered the United States’ state terrorism, because they are in fact aiming to kill children and patients,” said Rouhani.

At the same meeting, the President of Switzerland referred to the 100-year relations between Iran and Switzerland and said that the country’s impartiality and humanitarian tradition has roots in its history.

President Ueli Maurer added, “In this regard, Switzerland is looking forward to hearing Dr Rouhani’s initiative aimed at ensuring security in the region, called HOPE”.