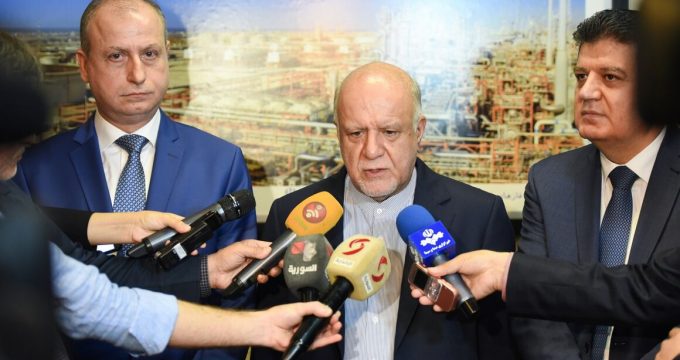 SHANA — The Iranian Minister of Petroleum met his Syrian opposite number in his Tehran office on Tuesday.

According to Bijan Zangeneh who talked to the reporters following the meeting with Ali Soleiman Ghanem, enhancing Iran-Syria relations was one of the highlights of the meeting.

“The more stability and peace is restored in Syria, the more will Iranian companies have a role in reconstruction of the country,” said Mr. Zangeneh.

He said Mr. Ghanem had visited Iran at the request of the Iranian Petroleum Minister, adding the Syrian official had visited energy facilities in southern Iran a day earlier and would visit Iran Plast International Exhibition afterwards.

He added that empowering human forces and training technical resources in Syria in the oil, gas and petrochemical sectors was another highlight of the meeting with his Syrian counterpart. “We declared our readiness to transfer our experiences in the gas industry, delivery networks and gas distribution to the Syrian side.”

He further described talks with the accompanying Syrian delegation as positive, expressing optimism that stability and peace be restored in Syria so that the Syrian people would step in the path of progress. “Iranian private companies will accompany them in this path.”

The Iranian Petroleum Minister further said that some Iranian companies were currently active in Syria having a role in reconstruction of the country, and said: “The more stability and peace is restored in Syria, the more will this presence and participation be augmented.”

For his part, Mr. Ghanem expressed astonishment at oil industry’s development in South Pars, saying: “I had heard that Iran’s oil industry had progressed a lot, but when I saw South Pars in person, I was surprised by the capabilities of Iranians in developing South Pars.”