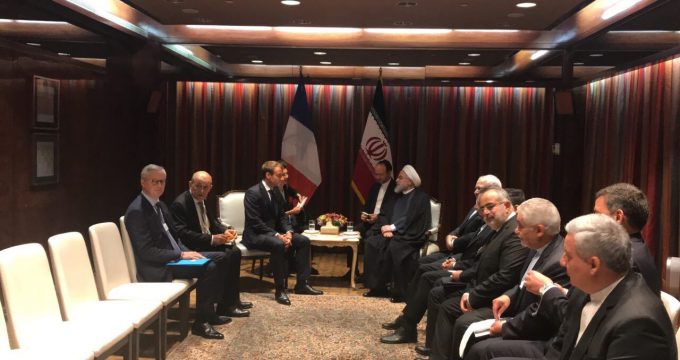 IRNA – Iranian President Hassan Rouhani and French President Emmanuel Macron reaffirmed de-escalation in the Middle East and discussed ways to develop bilateral ties and the sensitive situation in the region.

During the meeting which was held on the sidelines of the 74th Session of the United Nations General Assembly, both sides exchanged views on Iranian president’s initiative for maintaining security in the Persian Gulf called Hormuz Peace Initiative and underlined their determination for developing cooperation at bilateral and international levels.

President Rouhani underscored the responsibility of the JCPOA signatories namely France for preserving the nuclear deal after the US unlawful withdrawal.

He also criticized E3 (Germany, UK and France) for their recent statement and their baseless allegations to complicate Iran in attacks on the Saudi refineries.

Meanwhile, Macron welcomed Rouhani’s initiative for safeguarding peace in the region and elaborated on France’ efforts for implementing the JCPOA.

He described as essential the EU cooperation with other signatories especially Russia and China.

French president emphasized the need to develop cooperation with Iran as an effective country in the region.

Rouhani arrived in New York late on Monday to attend the 74th Session of the United Nations General Assembly.

Upon his arrival at New York’s John F. Kennedy Airport, Rouhani said we hope that we will be able to deliver the regional nations’ message which is peace and an end to any intervention in the sensitive Persian Gulf and the Middle East.

“I will also get the Iranian nation’s message across to the international community. The Iranian people are suffering from a cruel economic war. Iran is a nation of resistance and wants everyone to return to their commitments and laws,” added Rouhani who was talking to the Iranian media in the airport.

President Rouhani will deliver a speech to the UN General Assembly session on Wednesday.