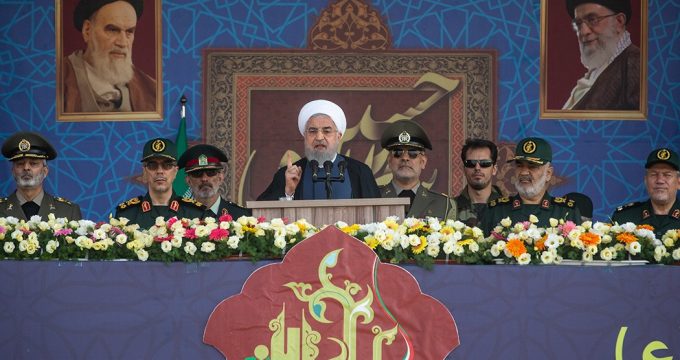 A year later, Iran finds evaporating sympathy at the UN

The New York Times | David E. Sanger and Farnaz Fassihi: The country’s foreign minister, on the defensive after attacks on Saudi oil facilities, says Iran has lost hope that the Europeans will counterbalance American sanctions.

When Iran’s president and foreign minister arrived in New York a year ago for the opening of the United Nations General Assembly, they were riding high. At news conferences and in television appearances, they cast President Trump as an untrustworthy deal-breaker, and European leaders largely sided with the pair in a desperate effort to preserve the 2015 nuclear agreement after the United States renounced it.

This year could not be more different.

Suddenly, President Hassan Rouhani and his witty, often biting American-educated foreign minister, Mohammad Javad Zarif, are on the defensive. They are denying any Iranian involvement in the destruction of two major Saudi oil facilities, an assertion that even former Secretary of State John Kerry, who negotiated the nuclear accord four years ago and has become its biggest defender, finds far-fetched. Iran, he said, was behind the attack “one way or the other.”

Iran is now admitting how much damage the American-led sanctions have done to its economy — crashing the currency and turning a boomlet into a recession.

Mr. Zarif, while reserving most of his anger for Secretary of State Mike Pompeo, who he has called a “warmonger,” has now turned on the Europeans. After committing to preserving the nuclear deal by compensating for much of the revenue Iran was losing, the Europeans “have failed in every single one” of their specific commitments, he said in a meeting with reporters on Sunday.

“They think they need some green light from the U.S.,” said Mr. Zarif, suggesting that Britain, France and Germany had strung him along with promises that they had little intention of fulfilling if it meant further straining their testy relationship with the Trump administration. 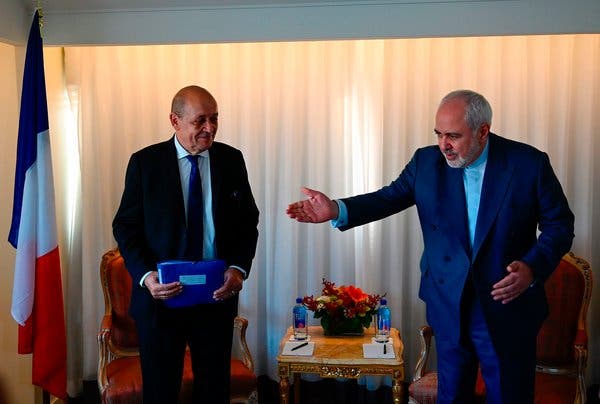 Last year, three months after Mr. Trump exited the nuclear deal, Iran came to the General Assembly attempting to insert a wedge between the United States and its European allies.

But “Iran has come to this year’s U.N.G.A. with a real wake-up call that what they are able to get from Europeans is no more than some limited political cover for support of the nuclear deal,” said Ellie Geranmayeh, the deputy head of Middle East and North Africa studies for the European Council on Foreign Relations.

Iranian officials, she said, have arrived in New York discovering that the Europeans cannot offer any substantive economic relief, and that even a French-led initiative to issue a credit line of $15 billion, essentially an advance payment on Iranian oil shipments, is likely to fail. Washington will most likely not issue waivers, and European banks are unwilling to join the effort if they believe they will be banned from clearing transactions in American dollars.

Two weeks ago, it appeared that Iran might find a way out, taking Mr. Trump up on his offer of negotiations. But the attacks on Saudi Arabia, and the American accusations of Iranian involvement, have all but killed that possibility, American officials said.

France’s priorities have shifted from brokering a meeting between Tehran and Washington aimed at restarting a dialogue to just trying to prevent a military conflict.

“The meeting between Trump and Rouhani is not the No. 1 subject,” Mr. Le Drian said. “The priority subject is whether we can restart a de-escalation path with the different actors.”

Mr. Zarif said that the decision on Friday by the Americans to designate Iran’s central bank as a financier of terrorism, making it virtually impossible for international institutions to do business with it, meant that Mr. Trump “knowingly or unknowingly closed the door to negotiations.”

All this may be posturing, of course, on both sides. For months now, Iranian elites have been signaling that the country would have no choice but to deal with Mr. Trump — Mr. Zarif, who has spent much of his life in the United States, now predicts that the president is more likely than not to be re-elected.

And Mr. Trump gyrates between threatening military action and repeating his assertion that the Iranians really want “a deal.” His aides say Mr. Trump episodically envisions the kind of leader-to-leader negotiations he has conducted with Kim Jong-un, though as one senior American diplomat noted recently, unlike Mr. Kim, Iran’s supreme leader, Ayatollah Ali Khamenei, “doesn’t hug and doesn’t write” complimentary letters. (Mr. Trump’s effort, through Senator Rand Paul of Kentucky, to invite Mr. Zarif to the Oval Office several months ago failed; Mr. Zarif said he would meet American leaders only for a deeply substantive conversation, “not a photo-op” of the kind held with Mr. Kim.)

But such a moment may have already passed.

The hawkish Mr. Pompeo clearly senses that the attacks on the Saudi oil facilities, for which he blamed the Iranians before any forensic evidence had been gathered, have fundamentally changed the negotiating dynamics. He finally has the opportunity he has sought for 18 months: a chance to kill Europe’s effort to neutralize sanctions. 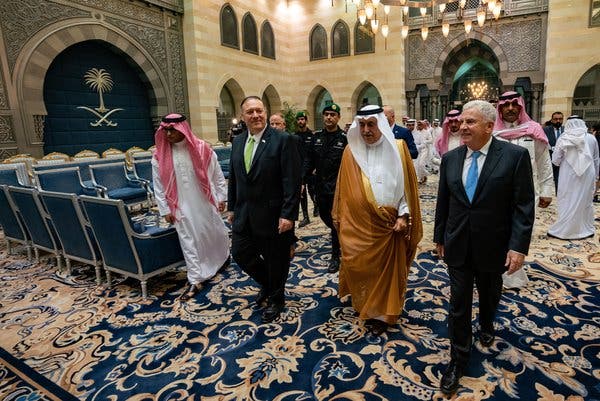 Mr. Pompeo doubled down on his critique on Sunday, saying the Iranians are “bloodthirsty and looking for war,” and suggesting that as the sanctions cut deeper, the Iranian people will demand changes in their government — though he stopped just short of demanding regime change.

Over the next few days, both sides will have to show their hands. When Mr. Rouhani arrives to speak to the General Assembly on Wednesday, Mr. Zarif said, the Iranian president will announce a “Coalition for Hope” and will invite a wide variety of nations — including the Sunni Arab states that view Iran as a mortal enemy — to join forces on “freedom of navigation and energy security.”

It seems highly unlikely that the proposal will gain any traction. But then again, Mr. Pompeo has also found few takers for an international coalition to patrol the Persian Gulf and surrounding waters to protect oil shipments.

On Wednesday morning, Mr. Zarif will join the nations that agreed to the 2015 nuclear deal — with the conspicuous exception of the United States — at a meeting about the future of the agreement. Mr. Pompeo, he said, “is welcome to join,” but to do so he must first sign back up to the terms of the old accord before negotiating a new deal.

“We can make the J.C.P.O.A. even better,” he said, using the formal abbreviation for the deal, known as the Joint Comprehensive Plan of Action. 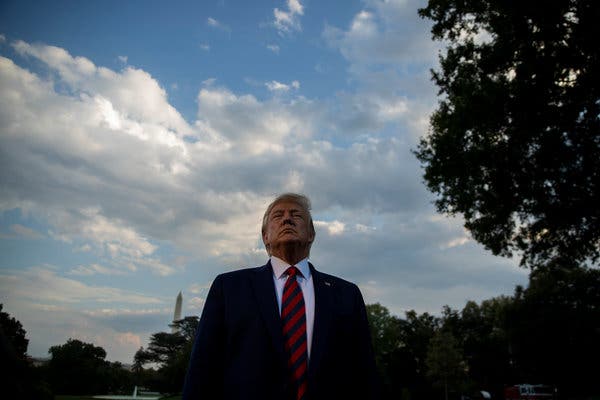 But Mr. Pompeo will not be there. Instead, he will be addressing a group called United Against Nuclear Iran, a vociferous critic of the 2015 deal.

The reality is that the accord is now on life support. While European officials say privately that they believe Iran is striking out at shipping and Saudi facilities only because of the American sanctions, they concede that the Saudi attacks most likely undermined their last hope for an agreement that would restore oil revenues to Tehran.

“For the U.S. to be part of any negotiation with Iran, it has to show it is a trustworthy partner,’’ Mr. Zarif said. Picking up on an American term of art, he said he would not “buy the same horse twice.”

“I bought the horse already,” he said of his efforts in 2015 to convince skeptical leaders in Iran, especially in the military, that the country would be better off signing on to the deal and ending much of its nuclear activity than continuing a relationship of hostility.

The stalemate contrasts dramatically with last year’s events. Back then, Mr. Zarif and the European Union foreign policy chief, Federica Mogherini, announced a complex European plan to neutralize the American sanctions with a barter system. Iran appeared to still be in full compliance with its commitments under the agreement, bolstering its effort to seem more invested in the international system than the United States.

David E. Sanger is a national security correspondent. In a 36-year reporting career for The Times, he has been on three teams that have won Pulitzer Prizes, most recently in 2017 for international reporting. His newest book is “The Perfect Weapon: War, Sabotage and Fear in the Cyber Age.”