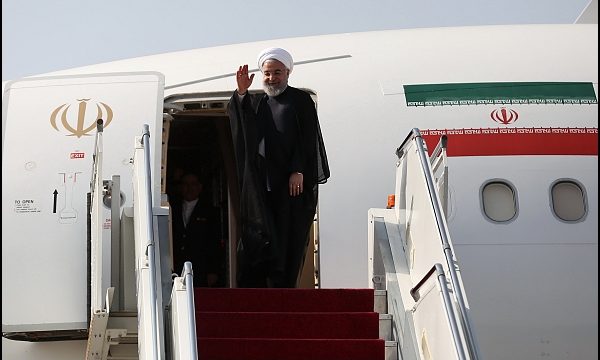 Tasnim – Iranian President Hassan Rouhani departed for New York on Monday to attend the annual gathering of world leaders at the United Nations.

Heading a high-ranking delegation, Rouhani left Tehran for New York on Monday morning after a see-off ceremony attended by First Vice-President Eshaq Jahangiri and Ali Akbar Velayati, an international adviser to the Leader of the Islamic Revolution.

The president is slated to deliver a speech at the 74th UN General Assembly meeting on Wednesday.

Earlier, the president’s deputy chief of staff for communications and information, Parviz Esmaeili, had said that during the visit, Rouhani would meet with the UN chief and several heads of state including those of France, Britain, Japan, Switzerland, Spain, Iraq, Sweden and Pakistan.

Meeting with senior managers of international media outlets and talks with foreign policy elites in the United States are also on the president’s agenda in New York.

The US’ delay in issuing visas for the Iranian delegation had put the trip to New York in doubt.

Iranian Foreign Minister Mohammad Javad Zarif said on Thursday that US Secretary of State Mike Pompeo was trying to delay issuing visas for the Iranian delegation to the upcoming United Nations General Assembly.

“@SecPompeo tries to dodge US obligation to issue visas for UN delegates by resorting to self-arrogated designation,” Zarif tweeted.

As the host of the UN’s headquarters, the US is required to offer world leaders and diplomats visas to attend meetings.

Zarif’s departure on Friday also came shortly after UN Secretary-General Antonio Guterres said that the international body had intervened to solve the matter.