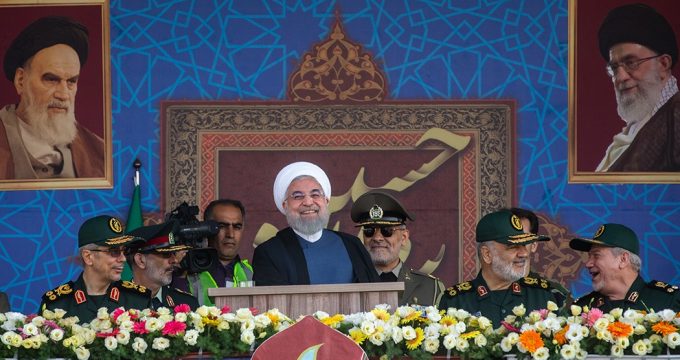 Tasnim – Iranian President Hassan Rouhani said Tehran was ready to overlook the mistakes that certain neighbors have made in the past and to extend a hand of friendship given the need to counter the divisive plots hatched by enemies of the region.

In an address to a military parade marking the Sacred Defense Week in Tehran on Sunday, Rouhani said the Islamic Republic would extend the hand of friendship and fraternity to all of its neighboring states in the current “critical and historic” juncture.

“In this regard, we are even ready to forgive their past mistakes, because today we are faced with conditions in which the enemies of the region, particularly the US, the arrogance and the Zionism, are seeking to exploit the gap, rift, and division among the regional countries,” the president said.

He also stressed that security of the Persian Gulf region must come from inside the region, warning that the presence of foreign forces would only create trouble.

Highlighting Iran’s openness to dialogue and negotiations, Rouhani said the Islamic Republic vigorously defends its interests and will not allow anybody to violate its border.

The Iranian president also denounced the US for upsetting security in Afghanistan, Iraq, the Persian Gulf and wherever it has dispatched military forces, saying that the Iranian Armed Forces, conversely, have always contributed to regional security.

Iranian military and political officials have repeatedly warned the enemies against the dire consequences of a military action against the Islamic Republic.