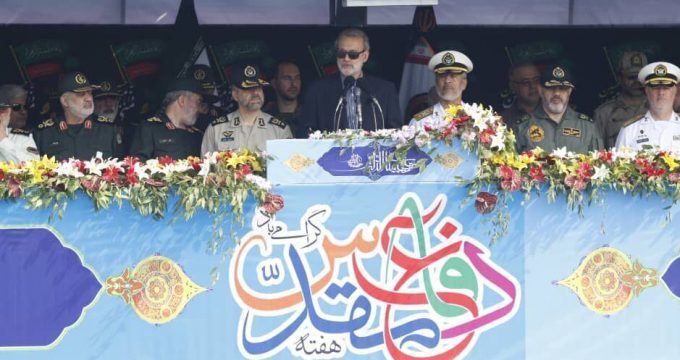 Larijani: Iran a friend, Israel a foe of regional nations

IRNA – Iranian Parliament Speaker Ali Larijani said on Sunday that the Islamic Republic of Iran is a friend and brother of all regional countries while the Zionist regime is a major enemy of Muslims.

“We know that our main duty today is to defend the oppressed Palestinian nation,” said Larijani while addressing the Third National Parade of the Armed Forces on the Persian Gulf in the southern Iran capital city of Hormuzgan province.

He said the Iranian Armed Forces have blinded and defeated terrorists and beaten the IS in the region by supporting the Iraqi and Syrian nations.

Larijani added that “Our country’s military forces, who have proven their worth in the sacred defense, have their places at the heart of the Iranian nation.”

The Speaker further stated that “today, the armed forces of the national capital and the country rely on development and development.”

Army of the Islamic Republic of Iran held parades nationwide on Sunday morning to mark the beginning of the Sacred Defense Week which coincides with the 39th anniversary of the invasion of the Iraqi army to southern oil-rich parts of Iran in 1980 led by the toppled Saddam Hussein. The war which ensued lasted for eight years.

A similar parade is underway in Tehran at the mausoleum of Founder of the late Imam Khomeini, southern Tehran.

Advanced military hardware and some other equipment of the armed forces are supposed to be displayed in the event.