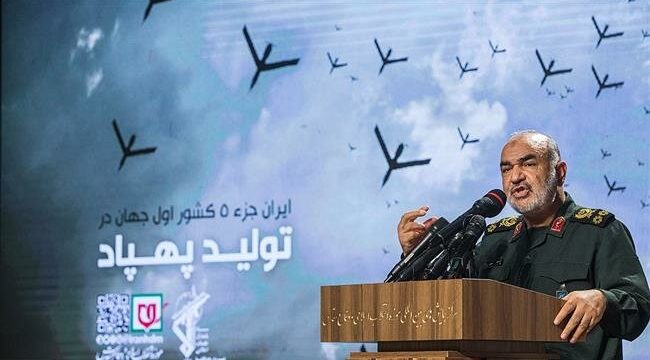 Press TV – The chief commander of the Islamic Revolution Guards Corps (IRGC) says Iran will never allow a war being dragged into its soil, stressing that the country will pursue the destruction of any aggressor even in case of a limited attack.

Major General Hossein Salami made the remarks during the unveiling of an exhibition showcasing drones captured from the enemy at Tehran’s Islamic Revolution and Holy Defense Museum on Saturday.

Iran has only demonstrated part of its military capability, he said, noting, “We will hit anyone who violates our borders” and will take responsibility for it.

Salami stressed that the Islamic Republic is not worried about the repetition of enemy’s strategic mistakes and is ready to face “any scenarios.”

“The enemy sometimes speaks about military options, but since the Tabas incident 40 years, when US Delta forces were burnt into ashes, we are the one who speaks; We are after response and will deliver a decisive response.” he said, referring to the April 1980 failed US military operation in Iran’s central Tabas Desert

“Whoever wants their land to become the main battlefield, go ahead. We will never allow any war to encroach upon our territory,” he added. “An aggression will not remain limited. We always pursue the invaders until they are vanquished and destroyed. We will not leave any safe place for the invaders.”

The remarks come amid heightened tensions between Iran in one side and the US and Saudi Arabia on the other side following Yemenis’ attacks on Saudi Aramco oil installations, which caused a partial halt in crude and gas production from the world’s top oil exporter.

Both Riyadh and Washington have blamed the raids on Iran without providing evidence.

Iran has rejected any involvement in the attacks, which were claimed by Yemen’s Houthi Ansarullah movement. The group has been defending the impoverished country against the Saudi-led invasion over the past four and a half years.

On Wednesday, US Secretary of State Mike Pompeo called the attacks on Saudi oil plants an “act of war” against the kingdom by Iran.