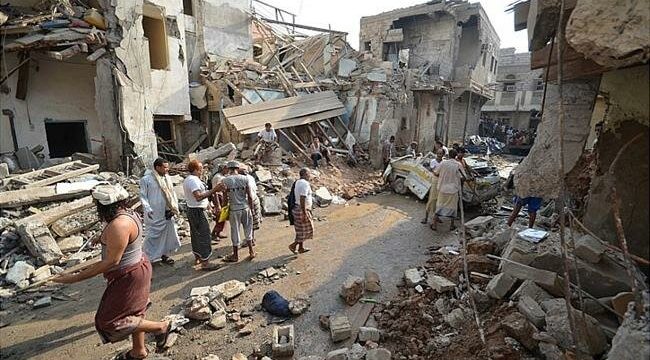 Press TV – The Saudi-led coalition has launched a military operation against the Yemeni port city of Hudaydah in violation of a 2018 UN-brokered ceasefire agreement.

The coalition spokesman Colonel Turki al-Malki claims the Friday raid has destroyed four sites which were “used in assembling remote-controlled boats and sea mines” and for carrying out attacks in the Bab el-Mandeb Strait.

He also claimed that the port city is being used by the popular Houthi Ansarullah movement to launch ballistic missiles and drones.

In reaction to the attack, the Ansarullah movement said through its al-Masirah TV that the coalition had breached the 2018 UN agreement reached in Stockholm.

In December 2018, representatives from Ansarullah and the Riyadh-sponsored government of Abd Rabbu Mansur Hadi reached a truce deal during UN-mediated peace talks in Sweden.

Under the deal, they agreed to the withdrawal of their troops and the deployment of UN monitors to the port city of Hudaydah, a lifeline for millions of Yemenis.

The Saudis have been enforcing a tight naval blockade on Yemen, particularly on Hudaydah, which acts as a lifeline for the impoverished nation, since August 2015, five months after it started the war.

The Friday raid on Hudaydah came less than a week after the Yemeni forces launched retaliatory drone attacks on two plants at the heart of Saudi Arabia’s oil industry, including the world’s biggest petroleum processing facility.

Attacks by 10 Yemeni drones on the key oil facilities at Abqaiq and Khurais have shut down about 50 percent of the kingdom’s crude and gas production, cutting the state oil giant’s crude oil supply by around 5.7 million barrels per day.

Ansarullah has repeatedly warned Riyadh that the continuation of aerial attacks on Yemeni people would draw a harsh response, which would go beyond the Saturday drone attacks.

Since March 2015, Saudi Arabia and some of its Arab allies have been carrying out deadly airstrikes against the Houthi Ansarullah movement in an attempt to restore power to fugitive former president Abdrabbuh Mansour Hadi, a close ally of Riyadh.

The war has also taken a heavy toll on the country’s infrastructure, destroying hospitals, schools, and factories. The UN says over 24 million Yemenis are in dire need of humanitarian aid, including 10 million suffering from extreme levels of hunger as the invaders keep obstructing inflow of direly-need supplies.

The US-based Armed Conflict Location and Event Data Project (ACLED), a conflict-research organization, estimates that the Saudi war has claimed more than 91,000 over the past four and a half years.