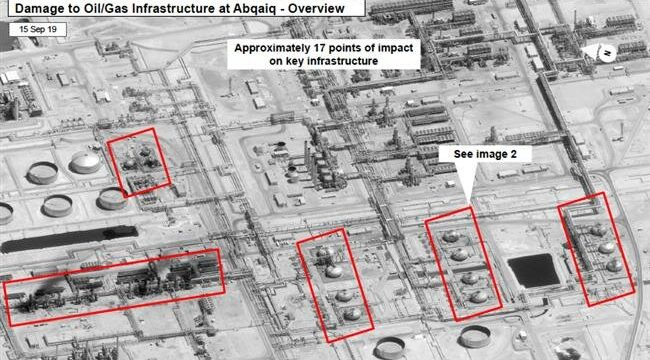 Tehran Times – As expected, oil markets started Monday trading with an unprecedented jump in prices following the attacks on Saudi Arabia’s oil facilities which wiped nearly five percent of the global oil supply from the market.

Now, few days after the attacks, global oil markets are waiting to see how the disrupted oil is going to be compensated for.

Will Saudis be able to get their production back to its full capacity in a short period of time? If not, what are the options for replacing the lost barrels to keep the market in balance?

A few hours after the strikes, Aramco released a statement confirming that production of 5.7 million barrels of crude (more than half of the kingdom’s output) was affected by the attacks.

Aramco’s statement sparked a wave of panic in the oil markets across the globe, causing for bets on oil prices to go as high as $100.

As it was expected, in the first minutes of the Monday morning trades, Brent crude jumped $12 to reach $71 per barrel, posting its biggest ever surge in a day.

The market’s significant reaction to the incident could also be translated as an indication of the skepticism about the promises of recovery by the Saudis or vows of taping into emergency oil reserves by the United States.

It is also a manifestation of yet another aspect of the world’s energy cycle, that is the realization a

bout the vulnerability of the global oil market and the magnitude of the impact of geopolitical factors on this market.

As Ed Morse from Citigroup Inc. wrote in a research note, “No matter whether it takes Saudi Arabia five days or a lot longer to get oil back into production, there is but one rational takeaway from this weekend’s drone attacks on the Kingdom’s infrastructure — that infrastructure is highly vulnerable to attack, and the market has been persistently mispricing oil.”
So, despite all the reassurance, oil markets around the world are once again overshadowed by the geopolitical risks and at least for some time the geopolitical risk premium will be seen in the oil prices.

Replacements for the lost oil

Many analysts and experts believe that Saudi Aramco won’t be able to get all the lost capacity back over a short period of time and it would at least take a couple of weeks to get back to the full capacity.

Considering the worst case scenario, some analysts believe that the oil market should be looking for new sources of crude supply in case the damage to the Aramco facilities turn out to be more than what is seems and the Saudi’s oil production takes more time than expected to get back to its full capacity.

One option, as previously mentioned, is the U.S. emergency reserves which Trump has promised to release to balance the market. However, analysts believe that such an action will likely not be taken in the short term.

“I don’t think a release is imminent,” Bob McNally, president of Rapidan Energy Group, told S&P Global Platts. “Everything depends on how much damage has been done and how long will it last.”

There is also the matter of distance and time, as Sandy Fielden, analyst at Morningstar puts it, “It takes 19-20 days to ship Ras Tanura (Saudi) to Singapore, but 54 days from Houston to Singapore. So U.S. ‘relief’ will take time.”

Another option which is more likely in the short term is Saudi Arabia’s own reserves in countries like China and Japan, but with the kingdom’s limited reserves, the loss could only be replaced for approximately 30-45 days, according to McNally.

“Saudi Arabia has about 188 million barrels of oil stockpiled, which can offset the 5-million-barrels of lost oil only for about 37 days,” McNally said.

Even if Aramco manages to recover 2 million barrels of the disrupted capacity in short term (as they have claimed), the other 3.7 million barrels should be supplied from the reserves.

So if the oil which has been disrupted is not replaced before the company’s stored supplies end, the market would go into an even more complicated situation.

Finally, some other believe that the easiest solution is to waiver the Iranian oil.

“The obvious short-term fix would be waivers on Iran sanctions, but politically that’s a hard pill for the Trump administration to swallow. By all accounts the Iranians have tankers full of storage ready to go,” Sandy Fielden said.

Jason Bordoff, founding director of the Center on Global Energy Policy at Columbia University also believes that Iran could be a reliable source of additional supply in case the disruptions prolong.