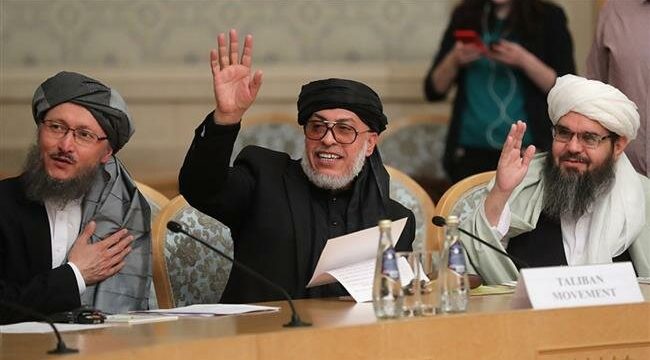 Taliban delegation in Iran for talks on Afghanistan peace

Press TV – Members of Taliban’s Qatar-based political bureau have visited Tehran and held talks with Iranian officials on the latest developments of the Afghan peace process, including the breakdown of US-Taliban negotiations.

The delegation has reportedly conferred with a number of political and foreign ministry officials of Iran on the Afghan peace talks and the intra-Afghan negotiations.

The visit to Tehran was the second foreign trip of the Taliban delegation after the collapse of its talks with the United States. The Afghan group earlier paid a visit to Moscow, Russia.

A senior Taliban leader in Qatar had earlier said, “The purpose of these visits is to inform leaders of these countries about the peace talks and [US] President [Donald] Trump’s decision to call off the peace process at a time when both sides had resolved all outstanding issues and were about to sign a peace agreement.”

“They thought that to kill people in order to put themselves in a little better negotiating position when they did that they killed 12 people … And you can’t do that can’t do that with me. So they’re dead as far as I’m concerned,” he said.

The US and its allies invaded Afghanistan under the guise of the war on terror. Some 18 years on, Taliban has only boosted its campaign of violence across the country and Washington has sought a truce with the militants.

After nine rounds of negotiations in Doha, which began in October 2018, American and Taliban officials agreed a draft accord that would have seen some 5,000 US troops withdrawn from Afghanistan in exchange for security guarantees from the Taliban.

However, Trump cancelled the talks in a move that surprised the Taliban leaders.

The group said that an agreement had been “finalized” and that discussions had ended in “a good atmosphere,” but the deal had been sabotaged by Trump.