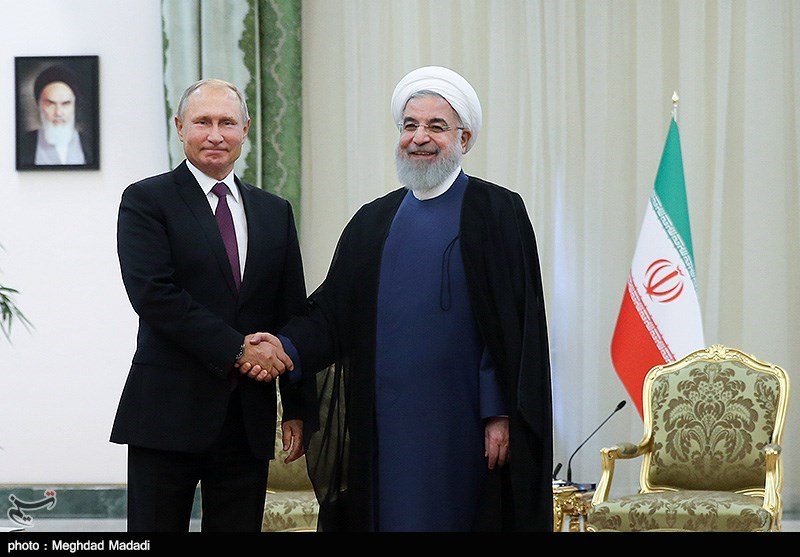 Tasnim – Iranian President Hassan Rouhani highlighted the notable impact of interaction between Tehran and Moscow on the security of Syria, saying their cooperation is beneficial for the region.

Rouhani held a meeting with his Russian counterpart Vladimir Putin on the sidelines of the fifth trilateral summit of Iran, Russia and Turkey in Ankara on Monday evening.

Hailing the “strategic, growing and progressive” ties between Iran and Russia, Rouhani said, “In addition to political and economic relations, Iran and Russia have good ties in defense and nuclear cooperation.”

“Consultations and friendly interaction between the senior Iranian and Russian officials on the sidelines of various international summits, including the United Nations, Shanghai and Eurasia, as well as the multilateral relations of the two countries, especially with Turkey on Syria and with Azerbaijan in the field of transportation, are in the interest of both nations and the region,” he added.

“With the will of the two governments, the relations between Iran and Russia are now closer than ever… The two countries’ use of national currencies in trade relations has been increasing over the past months and will continue,” the president’s website quoted him as saying.

“Iran’s cooperation with the Eurasian Economic Union, which will become operationalized soon, will provide a great opportunity for the development of bilateral and regional cooperation in various economic fields,” the president added.

He also welcomed the construction of ‘Sirik Power Plant’ in the south and the electrification of Incheboron-Garmsar railroad in north of Iran as another symbol of the new chapter in cooperation between the two countries. “Iran welcomes the investment of Russian economic and private sectors in various economic fields and the development of joint projects.”

“Today, the United States is looking for disorder in the world and keeps violating international regulations one after the other, so we have to stand up to unilateralism by expanding our cooperation,” the Iranian president further said.

“Today, as the US has withdrawn from the JCPOA without a reason, the other parties to the agreement, especially Russia, can play a positive role in saving the deal,” he said, adding that the 2015 nuclear deal was an important international agreement and a symbol of diplomatic settlement of an issue.

“Iran’s moves in reducing its JCPOA obligations are a step towards maintaining the deal, and Iran is ready to return to its commitments if the other parties do so,” Rouhani stated.

He further highlighted the results of cooperation among Iran, Russia and Turkey within the framework of the Astana Peace Process in the development of lasting security and stability in Syria, stating, “Today, Syria is in critical conditions and the government has achieved good victories against the terrorists. Therefore, the interaction and assistance of the three countries could continue to have a greater impact on the development of security in Syria and the region.”

“The most important thing for Syria now is the operationalization of agreements on clearing Idlib of terrorists and stabilizing the region,” Rouhani underscored.

For his part, Putin said, “Tehran and Moscow have good relations in various international stages, especially at the United Nations, the Shanghai Cooperation Organization and the Eurasian Economic Union.”

He said that Russia welcomes Iran’s presence in the Eurasian Economic Union and sees it as an important opportunity for the development of bilateral and regional cooperation.

“Russia is also committed to continuing cooperation with Iran in the defense, military and nuclear fields,” Putin added.

“The role of the Islamic Republic of Iran in resolving regional issues, particularly in advancing the political mechanism for resolving the Syrian crisis, combatting terrorist groups, and forming and constituting a constitutional committee in the country, is very positive,” said the Russian president.

He also emphasized that Moscow’s position was to preserve the JCPOA and to work in this direction, saying, “Russia is committed to the JCPOA and considers the IAEA’s monitoring of Iran’s nuclear activities the most important indicator of Iran’s compliance with its obligations.”