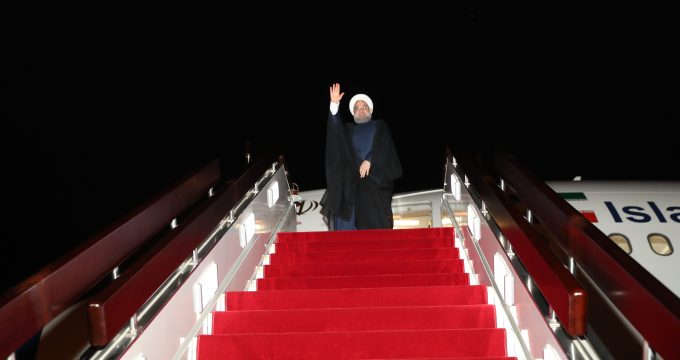 MNA – The Iranian President Hassan Rouhani has left Tehran for the Turkish capital to attend a trilateral meeting with his Russian and Turkish counterparts in order to discuss a political resolution to the crisis in Syria.

Before leaving Tehran for Ankara on Sunday evening, President Hassan Rouhani told reporters at Tehran’s Mehrabad airport that issues in the region must be resolved through regional dialogue.

Rouhani also pointed to the US intervention in the affairs of the region, condemning the illegitimate US military presence in the east of the Euphrates in the north of Syria as a destabilizing factor.

The Iranian president stressed the need to continue the fight against terrorists in Syria’s Idlib region.

He added that Syria’s constitution and the return of the refugees to their homes as two important issues going to be discussed in the trilateral meeting with President Erdogan and President Putin within the Astana format.

Rouhani stressed that the future of Syria belongs to the Syrian people and they must decide on their country’s future, adding that other countries must help the legitimate government of Damascus.

Meanwhile, the Iranian president emphasized that neighboring countries are a priority for Iran, underlining “we are ready to have brotherly and friendly relations with all our neighbors.”

The problems in the region will be resolved through dialogue and in Yemen through Yemeni-Yemeni dialogue, according to him, adding “the bombing of the Yemeni people must end.”