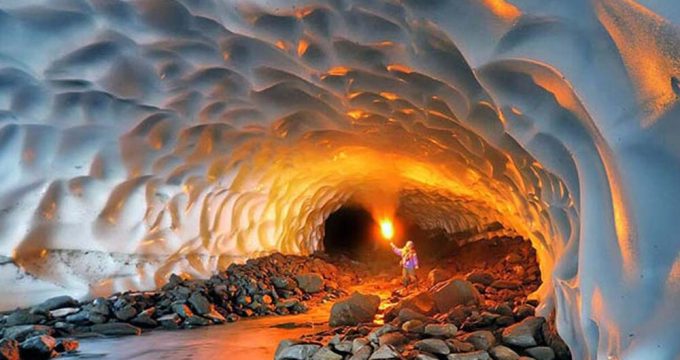 Tehran Times – Iran has added Azna snow tunnel, which is one of the most spectacular landscapes in western Lorestan province, to its national heritage list, ILNA reported on Thursday.

The Ministry of Cultural Heritage, Handicrafts, and Tourism announced the inscription on Thursday in a letter to governor general of the province, the report added.

Situated near the city of Azna on the slopes of Oshtorankuh, locally known as the Iranian Alps, the landscape is visited annually by hundreds of tourists, climbers and nature lovers.

Azna snow tunnel is created by the accumulation of thousands of tons of snow over many years. The length of the tunnel is over 800 meters and its height from the floor of the tunnel to the ceiling varies between 2.5 and 3 meters. This snow tunnel can be visited only in spring and summer.

To go to the snow tunnel, you have to go to Oshtorankuh, a mountain range with 13 peaks located five kilometers south of Azna. From this mountain range, there is a way to the flourishing village of Kamandan.

According to triptoir.com, to reach this tunnel, it is necessary to go to the village of Kamandan by car, and hiking from there for about two hours. When you arrive to the tunnel, the sound of the melting water of the snow caress the ear, the flowing water, which created a tunnel of 10 meters wide and three meters high below the glaciers; a tunnel extending up the slope of the valley. Although there is a chance of snow tunnel collapse, most tourists take the risk and visit inside of the tunnel.

Suitable time to visit this beautiful place is during spring, summer and early autumn.