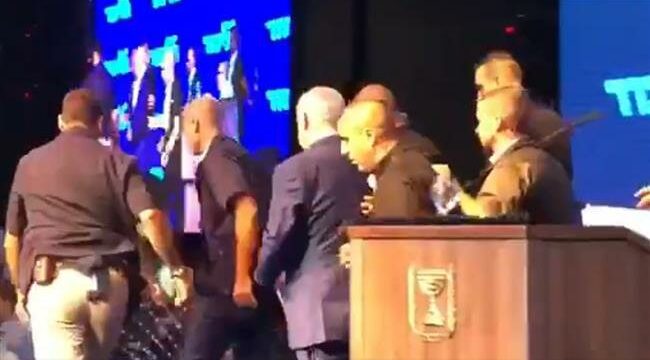 Press TV – Israeli Prime Minister Benjamin Netanyahu is forced to flee and seek shelter during a campaign event in the port city of Ashdod ahead of next week’s snap legislative elections as rockets fired from the besieged Gaza Strip threatened the area.

The siren went off on Tuesday night just as Netanyahu began his speech and addressed hundreds of supporters of the right-wing Likud-National Liberal Movement, which he chairs.

In an extraordinary scene captured on video from the event, the Israeli prime minister can be seen being whisked away from the stage by a gaggle of security guards.

“Leave quietly,” Netanyahu told the crowd before walking off the stage.

He returned some 20 minutes later to resume his speech.

“If Hamas is shooting at us in a live broadcast, you can understand they don’t want us here,” Netanyahu told Likud supporters. “So prepare for another one. We’ll evacuate, and then we’ll return.”
Gabi Ashkenazi, a member of Blue and White political alliance and former Chief of General Staff of the Israeli military forces (file photo)

In nearby Ashkelon, member of Blue and White political alliance and former Chief of General Staff of the Israeli military forces, Gabi Ashkenazi, had to cut a campaign event short due to the rocket fire.

The Israeli military said at least two rockets were shot at the occupied territories, claiming that both projectiles were intercepted by the so-called Iron Dome missile system.

Israeli medics said a 46-year-old woman was treated in Ashdod for anxiety after failing to reach shelter, but no other injuries or damage were reported.

Leader of the hard-line Yisrael Beiteinu party Avigdor Lieberman was evacuated from a party event at a restaurant in Ashdod.

Lieberman, a former Netanyahu ally turned nemesis, said the incident “proves that Netanyahu’s policies … are bankrupt. We must change direction.”

Earlier in the day, Netanyahu announced his intention to annex the Jordan Valley in the occupied West Bank if he wins the September 17 polls.

Palestinian President Mahmoud Abbas stressed that all agreements signed with Israel and their resulting obligations would end if the Tel Aviv regime annexes the Jordan Valley.

“We have the right to defend our rights and achieve our goals by all available means, regardless of the consequences, as Netanyahu’s decisions contradict with United Nations resolutions and international law,” Abbas pointed out.

Additionally, the United Nations on Tuesday warned Netanyahu that his plan to annex the Jordan Valley in the occupied West Bank would have no “international legal effect.”

“The secretary-general’s position has always been clear: unilateral actions are not helpful in the peace process,” UN spokesman Stephane Dujarric said.

“Any Israeli decision to impose its laws, jurisdictions and administration in the occupied West Bank is without any international legal effect,” he added.

“Such a prospect would be devastating to the potential of reviving negotiations, regional peace, and the very essence of a two-state solution,” Dujarric pointed out.

“The land of Palestine is not part of Netanyahu’s election campaign, and if he believes that by annexing the settlement blocs he will win electoral votes in the short term, he and Israel are the long-term losers,” Shtayyeh said.

“Netanyahu is the chief destroyer of the (so-called) peace process, and any foolish action he commits will leave negative consequences on him locally and internationally,” he noted.

He called on Spain and the European Union to speed up their recognition of the Palestinian state in order to support the two-state solution in light of the dangers facing the establishment of a Palestinian state within the 1967 borders with East Jerusalem al-Quds as its capital.

Israel occupied the West Bank in the 1967 Six-Day War in a move never recognized by the international community.

The Jordan Valley accounts for around one-third of the West Bank. Israeli right-wing politicians have long viewed the 2,400-square kilometer (926.65-square mile) strategic area as a part of the territory they would never retreat from and stated that the Israeli military would maintain its control there under any peace agreement with the Palestinians.