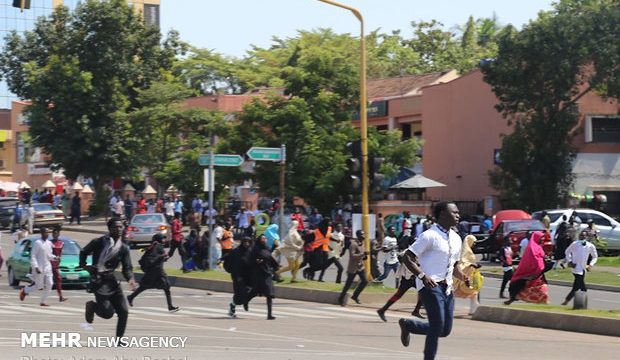 MNA – Three people were killed and dozens injured when security forces opened fire on Ashura processions in a number of areas in Nigeria.

According to a statement by the Islamic Movement of Nigeria, a joint team of Nigerian police and army opened fire on the participants in the Ashura procession, which commemorated the martyrdom of Imam Hussein (PBUH) in Kaduna, killing three on the spot and injuring dozens.

Witnesses said the capital, Abuja, was put a lockdown, with blocks set up to prevent Ashura mourners from holding gatherings.

The police in Katsina state also opened fire at followers of the movement’s leader, Sheikh Ibrahim al-Zakzaki, who gathered to commemorate Ashura in the Katsina center.

There were also reports of injuries in other states such as Gombe, Sokoto and Bauchi as a result of the targeting of the religious procession.

The Muslims were mourning the martyrdom of Imam Hussein (PBUH), who was martyred along with his 72 companions in the Battle of Karbala, in southern Iraq, in 680 AD after fighting courageously for justice against thousands of soldiers of the Umayyad caliph, Yazid I.

Citing its sources, the Islamic Human Rights Commission (IHRC) said last week that the Nigerian police were preparing to prevent and disrupt the processions.

The Nigerian government has banned the Islamic Movement in Nigeria (IMN) and has incarcerated its leader Sheikh Ibrahim al-Zakzaky.

Ashura, Muharram mourning, Nigeria September 10, 2019
Zarif in Trump reminder: Did you know Netanyahu pushed you into Afghan war, too?
Sahar Khodayari, #BlueGirl soccer fan, dies after setting self on fire